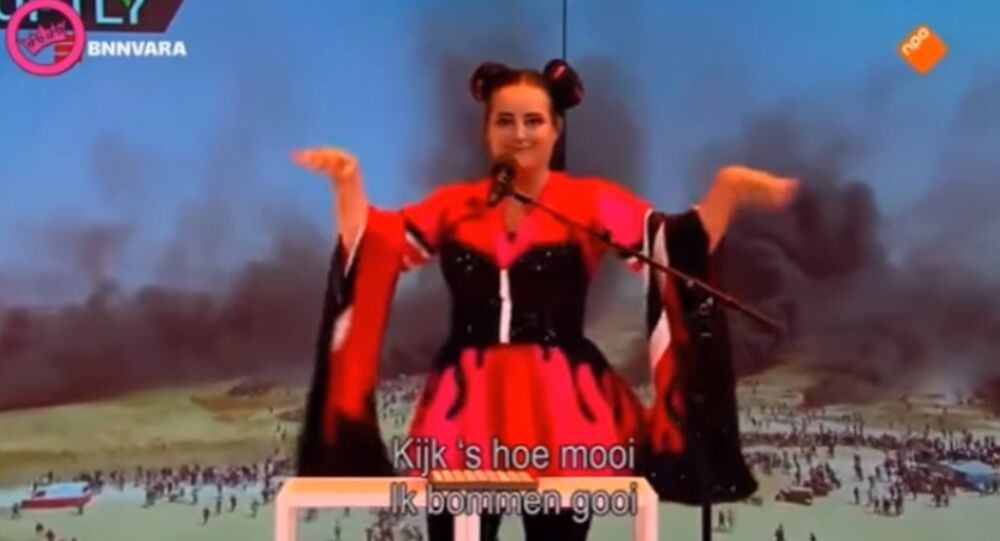 Israel’s victory in the Eurovision final on May 12 has been mirrored not only online, but by official mass media outlets, and a number of parallels have most naturally been drawn with the nation’s latest moves in the Gaza standoff.

The Israeli Embassy in Holland has issued an official letter condemning a parody involving the Israeli Eurovision winner’s hit as anti-Semitic in its essence, Israel’s Haaretz reported. Following the news report, some Twitter users rushed to claim that Israel lacks a sense of humor, while others reiterated their "disgust" with what they billed an "anti-Semitic" Dutch spoof.

Israel has lodged an official protest with the gov't of the Netherlands over a Dutch TV parody of Israel's Eurovision song. Because democracy and freedom of expression. https://t.co/EQ25ouls13

Disgusted to see the dutch @bnnvara come up with a "parody" picturing israel in the most #antisemitist manner as a sneaky country led by cash lust to rob and kill palestinians.
Feels like too many secret #nazis were triggered by the #eurovision win: https://t.co/uABXdFLz9u

@GillesBP The parody on @Netabarzilai on Dutch TV was not funny at all. It was full of anti- Semitic elements, like the suggestion that Jews stole Israel or that we are cheap and greedy. This show must be canceled! @jonahelshout

A satirical TV show on Dutch television has come up with new lyrics to the song "Toy" that earned Israel the first prize in the widely watched Eurovision Song Contest; the text notably lambasted Israel for its operations in Gaza.

In the parody, renowned Dutch comedian Sanne Wallis de Vries resembles Israeli 2018 Eurovision winner Netta Barzilai, also donning a kimono and similar hairdo. Obviously representing Israel, she says, as translated from Dutch that “the world’s leaders are eating of her hand,” going on to say that she is throwing a party at Al-Aqsa Mosque, destined to "soon" be "empty."

The lines about Wonder Woman were essentially replaced with the following: "From Haifa to the Dead Sea, there are fireworks and kosher satay / Come dance with me to the music."

Instead of the chorus where Barzilai originally sings "I’m not your toy," the Dutch comedian exclaims: "Look how beautifully I launch missiles," her words accompanied by dramatic scenes of the most recent Palestinian protests in the Gaza Strip, which saw many killed and injured.

Mentioning Israel’s 70th anniversary, she sings that the Palestinians “aren’t invited,” with footage in the background showing the opening ceremony of the new US Embassy in Jerusalem from May 15.

This is not the first time that Israel’s Eurovision winner has become a subject of a socio-political parody. Recently, one German cartoonist depicted Netanyahu in the image of Netta Barzilai holding a missile in his hand, with a speech bubble reading: "Next year in Jerusalem." The portrayal met pervasive criticism, prompting the chief editor of the popular German daily newspaper Suddeutsche Zeitung, where the caricature was published, to sack the artist.