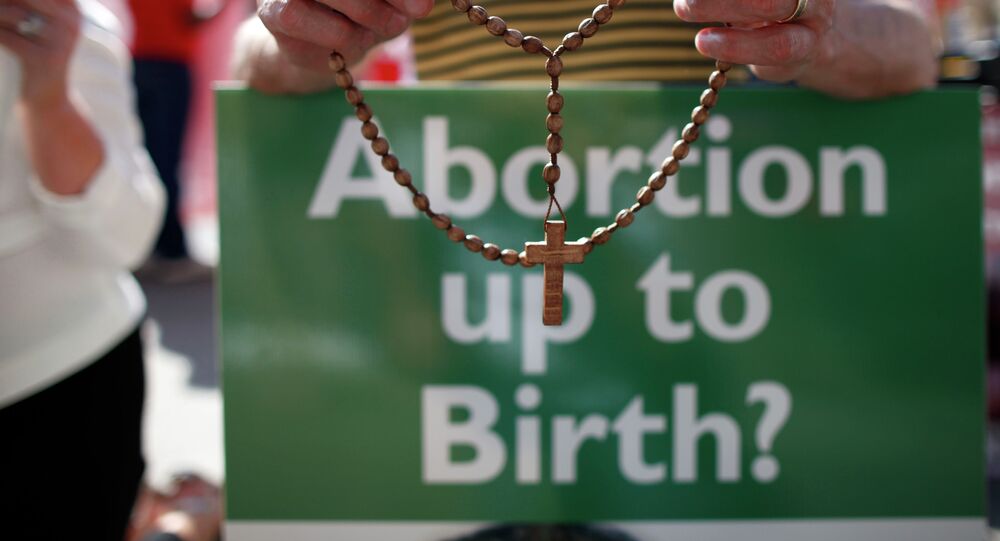 Although the first pictures demonstrating the vulnerable social group appeared a while ago, negative comments continue to come in, as the nation is preparing for the much-anticipated abortion referendum.

"The Emerald Isle" is increasingly seeing banners and posters put up by anti-abortion campaigners showcasing images of kids with Down syndrome; the message beneath reads the following: "In Britain, 90% of babies with Down’s syndrome are aborted."

Me: Why are you putting those up outside a school?

Me: You were asked by Down Syndrome Ireland not to exploit people with Downs Syndrome

The move, as well as the abortion debate at large has made the population even more divided, with politicians, the social media community, and especially parents of children with Down’s syndrome increasingly voicing their outrage.

Pro-choice bioethicist Dr. Chris Kaposy, who is father to a son diagnosed with Down’s syndrome, has lambasted what he calls a "propagandistic use" of kids like his own son by anti-abortion enthusiasts, who virtually put the vulnerable group into the center of a "contentious political debate," The Guardian reported. Kaposy, whose words are in line with the Irish Prime Minister Leo Varadkar, said that he is opposed to the use of people with disabilities in a bid to curb reproductive rights.

Despite the images put up by anti-abortion groups, Kaposy, a lecturer in bioethics at Memorial University in Canada, claimed that liberalized reforms would not be a pretext for abortions, since in most cases screening tests reveal the syndrome only at 13 weeks and later, and the condition according to him, does not pose fatal health risks to the would-be mother and nor to the embryo.

Most Twitter users echo his line of thought, reacting most emotionally to the unethical use of pictures. Some have reiterated demands made earlier this year by the social organization Down Syndrome Ireland:

I hope to fuck this referendum passes and these people fuck off for foreseeable. Their behaviour is contemptible. They've exploited those with down syndrome. They've defamed. They've lied. They've made every effort to devalue families across Ireland. #together4yes #repealthe8th

Just saw a massive banner in shopstreet with a picture of a boy with Down syndrome saying to save the 8th. So gross!! Down Syndrome Ireland have asked that Down syndrome people not be used in arguments for campaigns for either side. Stop exploiting people to promote your views

Yes, she is. She is very welcome to Ireland.

Clearly the Galway #SaveThe8th/#LoveBoth campaign didn't read my letter about respecting the wishes of Down Syndrome Ireland because they had a banner with a child with DS yesterday on Shop Street.

Majority Catholic Ireland is currently in a heated debate over legalizing pregnancy termination, which is banned under current laws. Anti-abortion campaigners have tried to make it obvious in their posters that repealing the Eighth Amendment to the Constitution which grants the same right to life to the mother as her unborn kids since they were conceived, would lead to the pervasive aborting of fetuses that are feared to have Down’s syndrome.

Ireland has been traditionally considered the most Catholic country in the world,  where the lion’s share of the population attend church services, and where divorce, contraception and abortion have been strictly forbidden. In recent years, however, the country has gone through significant secularization, even more so after a 2015 referendum endorsed same-sex marriage. Another vote this week could ease the country’s strict abortion laws.

This is a National Emergency! #together4Yes is highly dangerous to #Ireland. It is absolutly criminal of @FineGael to promote #Eugenics, infantcide and the extermination of unborn persons with Down Syndrome. This must be STOPPED! #SaveThe8th don't #repealthe8th #VoteNo #8thref. https://t.co/4LEQvMXsty

On May 25 Irish voters will speak for or against the repeal of the Eighth Amendment to Ireland's Constitution which protects the right to life of the unborn alongside the mother's, even in cases of rape, child sexual abuse and incest. It means an abortion can be conducted if there are risks to the mother's life, provided pregnancies are no more than 12 weeks along in the process. As of today, each year over 3,000 Irish women and girls have to travel to the UK to get a termination.