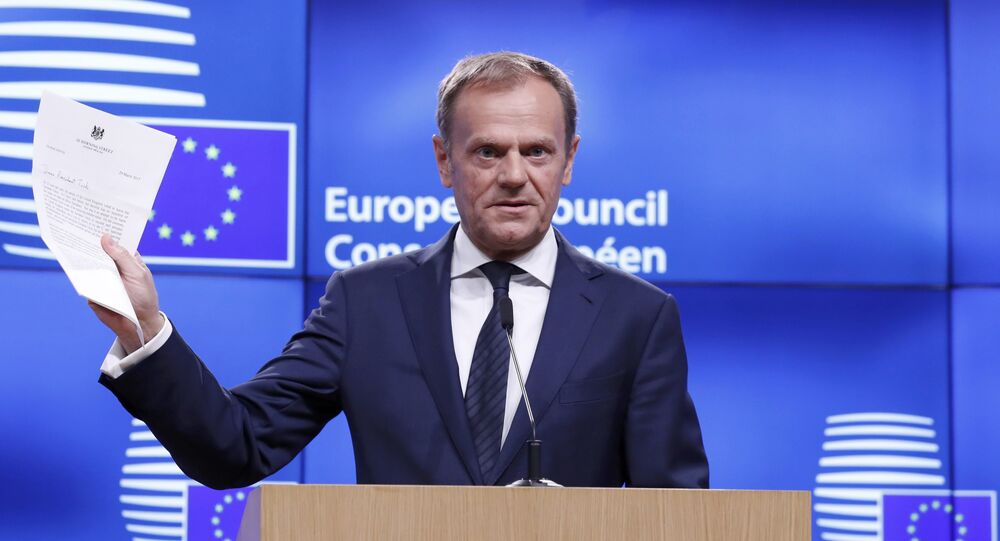 European Council President Donald Tusk lashed out at the US president, blasting his decision to pull out from the Iranian nuclear deal and stirring up trade disputes with other countries, and lamenting that one does not need enemies with friends like Trump.

The senior official said that EU should be grateful to Trump as he helped the bloc get rid of its illusions.

Looking at latest decisions of @realDonaldTrump someone could even think: with friends like that who needs enemies. But frankly, EU should be grateful. Thanks to him we got rid of all illusions. We realise that if you need a helping hand, you will find one at the end of your arm.

Previously in March Tusk offered a more conciliatory stance on the economic differences between the US and EU, urging Trump to "go back" to trade talks instead of waging a "trade war."

President of the European Commission Jean-Claude Juncker also remarked last week that the European Union should replace the United States as a global leader after the latter "as an international actor has lost vigor, and because of it, in the long term, influence."

Earlier this month, US President Donald Trump announced that his country would exit the 2015 nuclear deal, formally known as the Joint Comprehensive Plan of Action (JCPOA), and reinstate the previously lifted sanctions on Iran. Other signatories to the JCPOA have criticized Trump’s decision to unilaterally pull out the deal.

READ MORE: Washington Has No Intension Of Protracted Tariff Exemptions — US Commerce Chief

Trade tensions have been growing since March 23, when Donald Trump ordered to introduce a 25% tariff on steel imports and 10% tax on aluminum, claiming to protect the US producers from unfair competition and boost national security.

© REUTERS / Jason Lee
Oil to Soar to $100, US-China Trade War Nears: What's Behind Trump's Policy?
This move sparked discontent among the key US trading partners, especially the EU. Brussels has taken a tough stance on the matter, as its chief officials claim that retaliatory measures inherent in a full-scale trade war would be taken if the EU isn't excluded from new protective tariffs.

Following the international discontent, the US introduced temporary exemptions to some of its allies until May 1. Later, Washington extended the exemptions for the European Union, Canada and Mexico for 30 days in order to make time for talks on the terms of steel and aluminum imports.