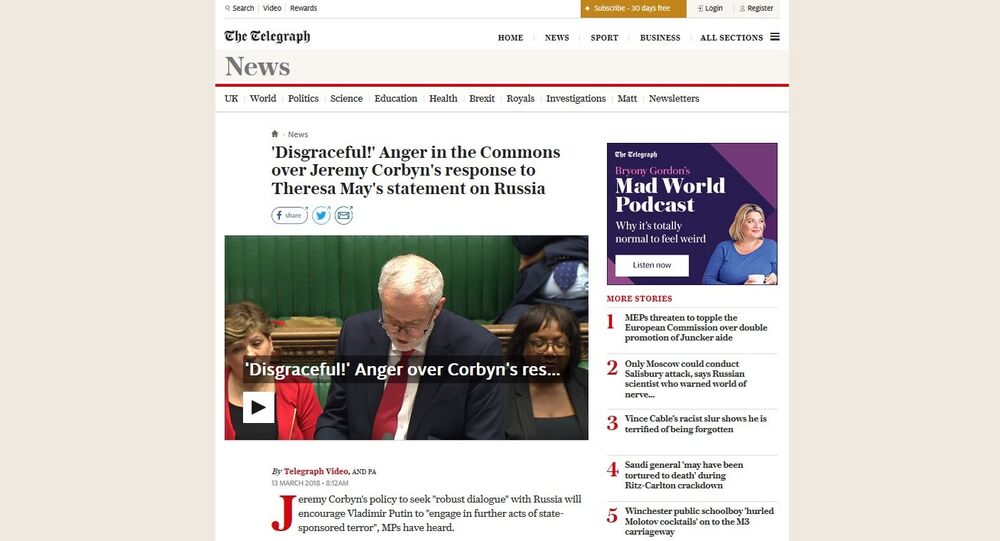 UK Opposition leader’s more “centrist” appointments come on the heels of the BBC’s rejection of accusations of bias in its coverage of Mr. Corbyn after having investigated itself.

The decision to appoint both figures from more mainstream media backgrounds, which was reportedly made internally last week, came at the same time as the BBC formally rejected accusations of bias in its coverage and depiction of the Opposition Leader.

At least 48 complaints were made to the public broadcaster after a March episode of the current affairs program Newsnight, in which the red background showed Mr. Corbyn's image superimposed on images of the Kremlin and historic Soviet insignia.

© AFP 2020 / Carl Court
Conspiracy of Silence: BBC Admits MI5 Vetted Staff to Weed Out 'Subversives'
Mr. Corbyn's depiction which was interpreted by many media and online observers as the BBC implying ties to the Russian government, came after his calls for the investigation into the poisoning of former Russian agent Sergei Skirpal and his daughter to be properly investigated before publicly making accusations.

The fact that the public objections were dismissed and that they were investigated by the BBC itself has done little to temper criticism online, with many social media users pointing to the alleged conflict of interest in the public broadcaster policing its own conduct.

The @BBC formally rejected complaints that @BBCNewsnight Photoshopped an image of Jeremy Corbyn to make him look “more Russian”. "The picture was 2000% impartial & fair & we're bewildered how anyone could possibly look at this picture & associate Corbyn with Russia".#BBCBias pic.twitter.com/fpowZlMzoZ

As a designer, if someone said to me, make Jeremy Corbyn look Russian — this is probably what I would have done.

FFS, the rejection of the complaint is true, the quote "The picture was 2000% impartial & fair & we're bewildered how anyone could possibly look at this picture & associate Corbyn with Russia", is not. The @BBC may be biased as hell, but they're professionally biased.#BBCBias

In the same month Mr. Corbyn was also accused by sitting members of the ruling Conservative party of having historic links to intelligence services of the Eastern bloc, namely Czechoslovakia, in the final years of the Cold War.

The accusations were widely repeated by major British media outlets, particularly those owned by Rupert Murdoch, but were ultimately withdrawn due to a lack of evidence and threats by the Labour Party to sue for libel.