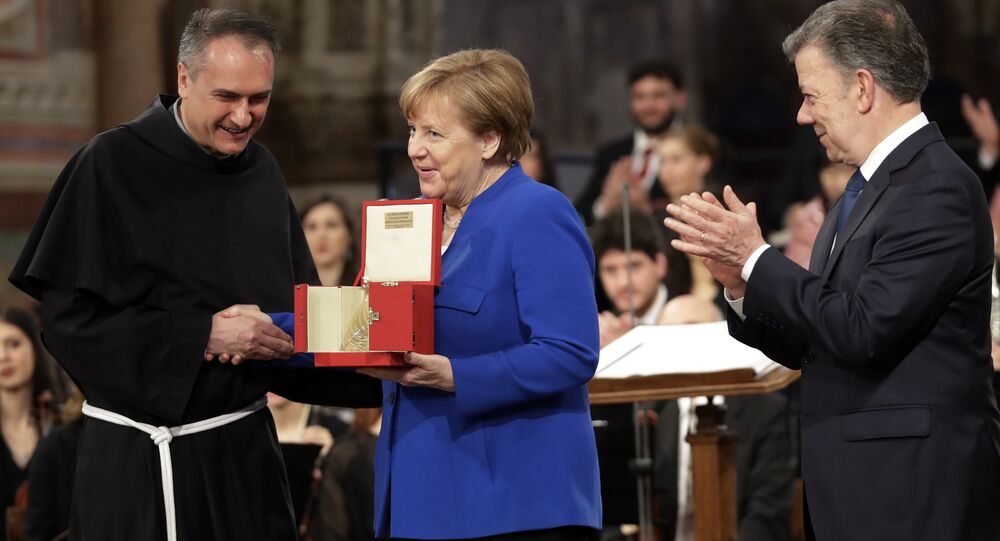 The German chancellor has stated that Germany would remain in the Joint Comprehensive Plan of Action, rejecting US President Donald Trump's appeal to follow his example in leaving the deal and reinstating full-scale sanctions against Tehran.

German Chancellor Angela Merkel has received the "Lamp of Peace" — a Catholic award for pursuing the peaceful coexistence between nations.

During the award ceremony at St. Francis' Basilica in the Italian city of Assisi on Saturday, Angela Merkel has stated that the recent escalation of the Israeli-Iranian conflict was cause for deep concern, adding that President Donald Trump's decision to withdraw the US from the Iranian nuclear deal makes the situation in the Middle East "even more tense" to solve.

Standing in the 13th century church, the German chancellor has mentioned Syria as "one of the biggest humanitarian tragedies" of the modern world, urging politicians around the globe to make every possible effort in order to end the crisis.

© REUTERS / Hannibal Hanschke
Trump's Iran Decision Won't Influence Transatlantic Cooperation - Merkel
Merkel has also warned about the rise of populism in Europe and particularly in Italy, claiming that "tolerance must be always present in the European Union."

According to the press office director of the Sacred Convent of Assisi, Enzo Fortunato, Merkel was awarded for her efforts to accept refugees.

"In this painful and most crucial period of the biblical outcome of the Syrians from their land, the German Chancellor opened the borders, showing courage and determination, without fear of going against public opinion," the priest noted, explaining the decision of the Franciscan Order.

The award was first made in 1981 to Polish trade union leader Lech Walesa. Among its past recipients are Pope John Paul II, the Dalai Lama, Saint Teresa of Calcutta and former Soviet President Mikhail Gorbachev.