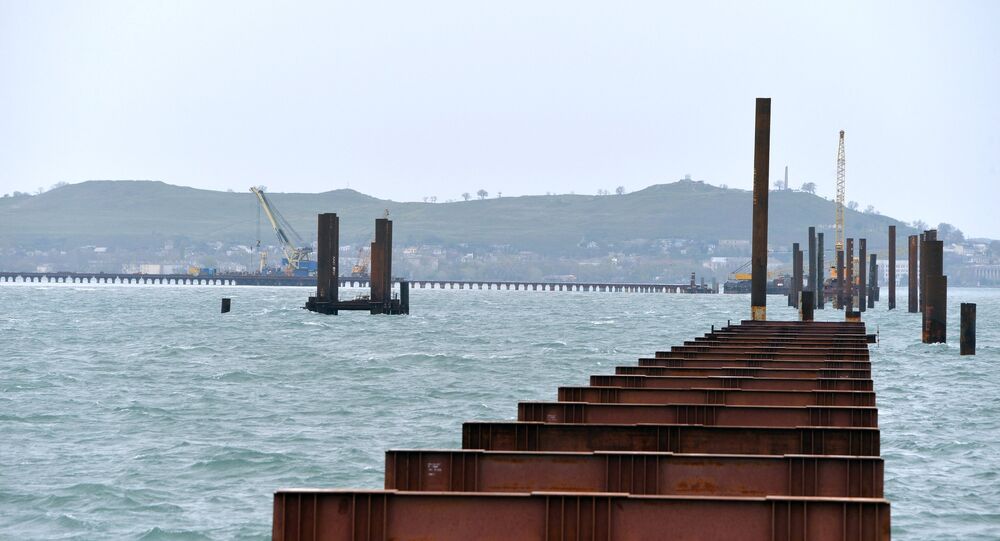 MOSCOW (Sputnik) - Dieseko Group, a Dutch company specializing in engineering, production, sales and rental of vibratory hammers, power packs, piling and drilling rigs, acknowledges that it is under investigation over its role in the construction of the Kerch Strait Bridge, which links Crimea with Russia, a company official told Sputnik.

"From here, I can’t tell you anything about contracts, because we’re under investigation. That’s for sure. I don’t have any additional comments," Douwe Feenstra, marketing manager at Dieseko Group, said.

Feenstra declined to verify whether his company sold or leased products to the state-owned Russian construction company Mostotrest, which is responsible for the construction of the Kerch Strait Bridge.

Youtube / Sputnik
Russia's Magnificent Crimean Bridge Gets New 5,500-Ton Road Arch
According to corporate filings of Mostotrest, its subsidiaries leased equipment including PVE 130M and PVE 110M from the Dieseko Group on August 26, 2015 for 69.4 million rubles (about $1.11 million) and 57.5 million rubles (about $0.92 million), respectively. The contract is expected to be completed by Jan 15, 2019. PVE 130M and PVE 110M are vibratory hammers commonly used for laying the foundation of major projects, such as piles for bridges.

While confirming PVE 130M and PVE 110M are products from the Dieseko Group, Feenstra refused to verify whether the equipment provided to Mostotrest was indeed used to build the Crimean Bridge.

"We do not comment on any questions regarding the matter. Currently, we are awaiting the outcome of the pending investigations," Frank Witte, spokesperson on behalf of Dieseko Group, told Sputnik in an emailed statement.

Derk van den Heuvel, director of Dematec Equipment, told the Dutch Newspaper that he did not believe his company violated EU sanctions in place by leasing impact hammers to Russia, because the equipment was assembled on Russian territory, not in Crimea. Marcel Biljard, director of Biljard Hydrauliek, also denied any wrongdoing, because it simply provided parts to Dematec Equipment, according to the report from De Gelderlander.

© Photo : Youtube/Sputnik
To Crimea on Foot: Another Step Towards Completion of Kerch Strait Bridge
According to corporate filings of Mostotrest, the Russian construction giant spent 101 million rubles (about $1.61 million) leasing the IMPACT 35S515 hammer on August 18, 2015. The leasing contract for IMPACT 35S515 ends on Jan 15, 2019.

Both Heuvel and Dematec Equipment’s office did not respond to questions from Sputnik.

Construction for the bridge over the Kerch Strait began in May 2015. The project aims to facilitate transportation between mainland Russia and the peninsula, which were previously connected only by a ferry line.

In 2014, Crimea rejoined Russia as a result of a referendum. Even though the West has not recognized the vote, the Russian authorities have maintained that the plebiscite was carried out in line with international standards.

Construction Work on the Crimean Bridge More Than Half Way Done