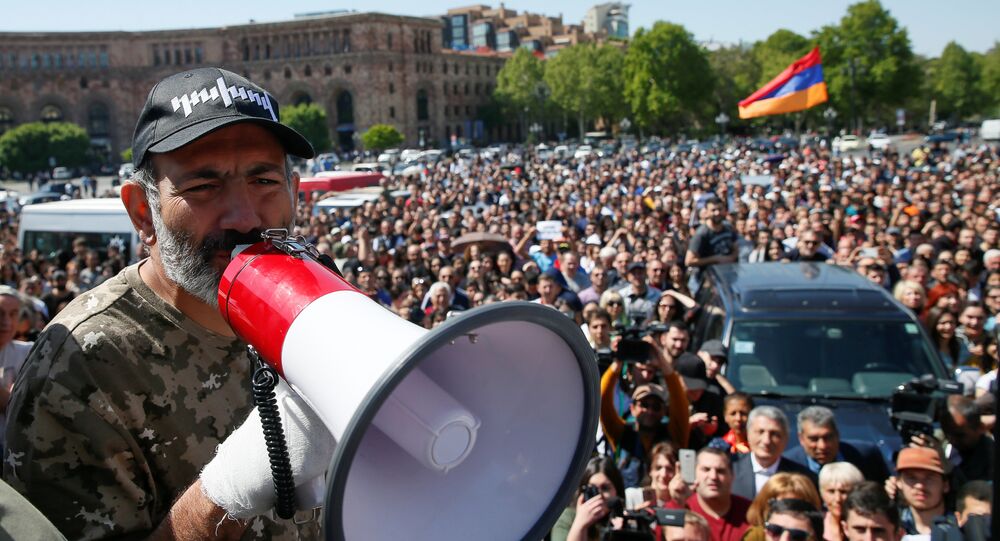 YEREVAN (Sputnik) - Ararat Mirzoyan, a member of the Armenian Way Out Alliance (Yelq) parliamentary group, has nominated Nikol Pashinyan, an opposition figure who has been leading protests in the country, as a candidate for prime minister during the special session of the country's parliament.

"We propose Nikol Pashinyan's candidacy for the post of the head of the Armenian government," Ararat Mirzoyan said at the parliamentary session.

Meanwhile, Ara Babloyan, the president of the Armenian National Assembly, described the situation with the election of a new prime minister as unprecedented.

"The parliamentary majority has not nominated its candidate and is discussing the candidate proposed by the minority," Babloyan said.

The Yelq candidate has also enlisted the support of two other parliamentary parties — Tsarukyan and the Armenian Revolutionary Federation. The three parties take a total of 47 of the parliament's 105 seats, and thus Pashinyan needs at least six votes in favor from the ruling Republican Party of Armenia (RPA) to be elected as prime minister. On Sunday, RPA faction head Vahram Bagdasaryan said that the party would not impede Pashinyan's election.

© REUTERS / Gleb Garanich
Thousands Attend Armenian Opposition Rally in Central Yerevan
A political crisis in Armenia broke out earlier in April after ex-President Serzh Sargsyan was nominated as prime minister. This was largely regarded as a way for Sargsyan, who previously served as president for two terms, to stay in power. Earlier, Sargsyan resigned amid large-scale anti-government protests. Armenian First Deputy Prime Minister Karen Karapetyan became an acting prime minister. However, rallies in the country continued as the opposition demanded an interim prime minister who will not be from the ruling RPA.
...
Reddit
Google+
Blogger
Pinterest
StumbleUpon
Telegram
WhatsApp
02