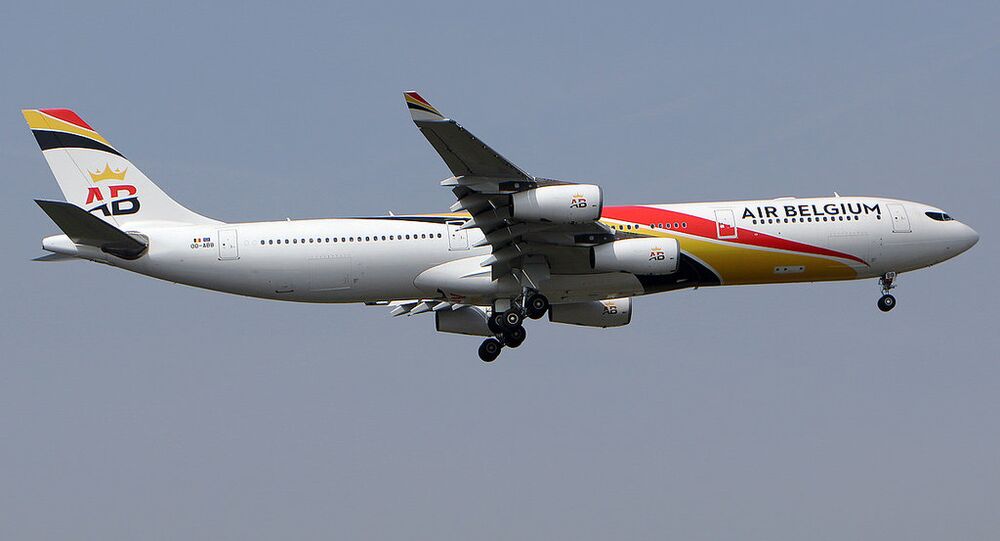 BRUSSELS (Sputnik) - Belgium's new Air Belgium start-up airline, whose flights destinations are mainly in China, is facing difficulties due to the absence of authorization to conduct flights over Russian territory resulting in the repeated postponement of its inaugural flight, which is now set to take place on June 3.

The airline, which was first presented in 2016 and then officially established in May 2017, is based at the Brussels South Charleroi Airport. About 25 percent of the airline's capital is accounted for by the investment of Belgian state financing structures SRIW (the Wallonia Regional Investment Society) and SFPI (the Federal Holding and Investment Company). In April, the airline started to sell tickets for its flights without an overflight permit from the Russian authorities.

The flight's postponement forced Air Belgium to compensate passengers who had already booked their flight, or at least to find an alternative for them.

"We are talking about less than a thousand people because Chinese tourists are traveling via a tour operator and are not concerned," Nicolas Boulart, the spokesman for Air Belgium, said at a press conference.

YouTube screengrab
RIP: Pentagon Kills $89.4 Million X-Plane Drone (VIDEO)
On the Belgian side, nobody can explain the authorization refusal. The explanation should probably be found in the recent spate of tensions between Russia and the West, which accuses Russia of having poisoned former spy Sergei Skripal and his daughter in the United Kingdom and of supporting the government of Syrian President Bashar Assad, which is thought to be responsible for the use of chemical weapons in an alleged attack in Duma earlier in April.

It is possible that Air Belgium could go down for the aggressive declarations by the Belgian lawmakers regarding Russia and for the expulsion last month of a Russian diplomat by Belgium in solidarity with the United Kingdom in the Skripal case.

Meanwhile, earlier in April, Air Belgium CEO Niky Terzakis said that the company still hoped to receive the overflight permit from the Russian authorities, adding that all the other required permissions had been secured in advance.

Apart from the absence of the overflight permission from Russia, which is considered to be the greatest problem, the company is also facing operational and financial difficulties.

© AP Photo / Steve Helber
Rolls-Royce Seeking to Become Engine Provider for Russia-China Wide-Body Plane
First, the Air Belgium's public partners SRIW and SFPI have arranged that the airline, which operates four Airbus A340-313 planes, should be based at the Brussels South Charleroi Airport, where airstrips are too short for big planes such as the A340-313 to take off at full capacity.

Besides, the airline's four-engine airplanes are no longer in demand on the market as they are more costly to run than two-engine planes.

Secondly, the company is under-capitalized with a capital of 18.6 million euros in 2018, which is more than modest for the airline business.

Russian Airline Pledges to Sell Tickets For Less Than $0.1 During 2018 World Cup