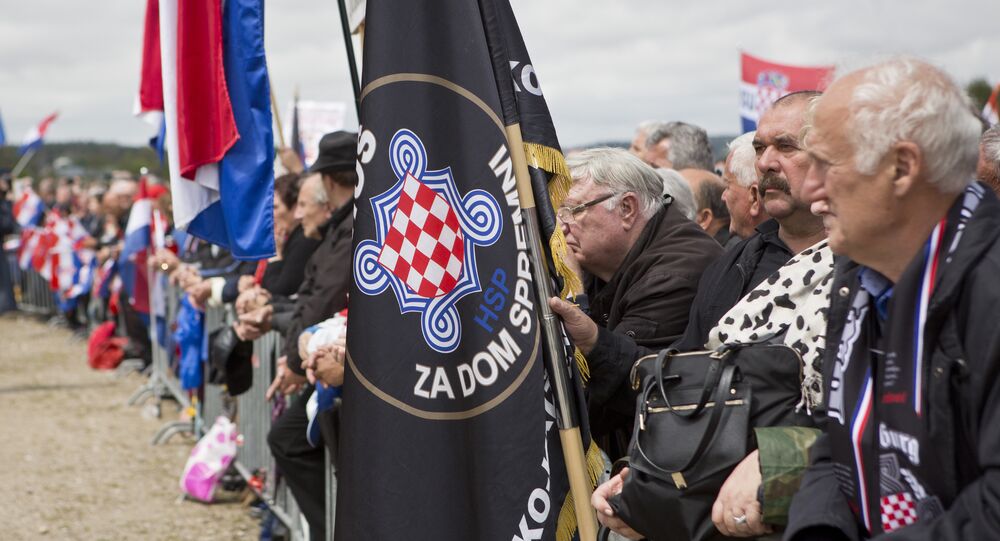 A planned far-right rally in Bleiburg to commemorate a WWII massacre of thousands of Nazi-allied Croatian troops by Yugoslav partisans is just an attempt to display fascist symbols, three MEPs said.

Austria's Chancellor Sebastian Kurz said he is powerless to stop the upcoming gathering, The Local reported.

"The event taking place is an event organized by the (Croatian) Church," Kurz said ahead of the annual May 12 gathering in Bleiburg, a small town in the southern Austrian state of Carinthia, close to the Slovenian border.

"That means it is neither the decision of the federal government nor of the state premier (of Carinthia) and his administration whether this event takes place," he added.

© AP Photo / Ronald Zak
Austria's Right-Wing FPO Members Nominated for Ministers of Interior, Defense
Members of the European Parliament Othmar Karas from the governing Austrian People’s Party, Josef Weidenholzer from the opposition Social Democratic Party of Austria, and Angelika Mlinar from the opposition New Austria and Liberal Forum told reporters in Vienna that the Bleiburg commemoration should not be used as a platform for extremists to praise Croatia’s WWII fascist Ustasha movement and display its symbols.

They said that Ustasha symbols are banned in Croatia, but not in Austria, and called for a law at the EU level that would ban all Nazi and fascist symbols.

The upcoming rally will remember the killing of sympathizers of Croatia's Ustasha regime and others at the hands of Yugoslav partisans in 1945 in and around Bleiburg.

According to various estimates, between a few hundred and tens of thousands Ustashas were killed.

The DOW, which deals  with research concerning resistance and persecution from 1934 until 1945, exile, Nazi crimes and, right-wing extremism after 1945, has slammed the upcoming commemoration of the Bleiburg events as “the biggest fascist meeting in Europe."

The Ustasha – Croatian Revolutionary Movement – was a fascist, racist and ultranationalist organization active, in its original form, between 1929 and 1945.

In April 1941, it was appointed to rule a part of Nazi-occupied Yugoslavia as the Independent State of Croatia, which has been described as both an Italian-German quasi-protectorate, and as a puppet state of Nazi Germany.