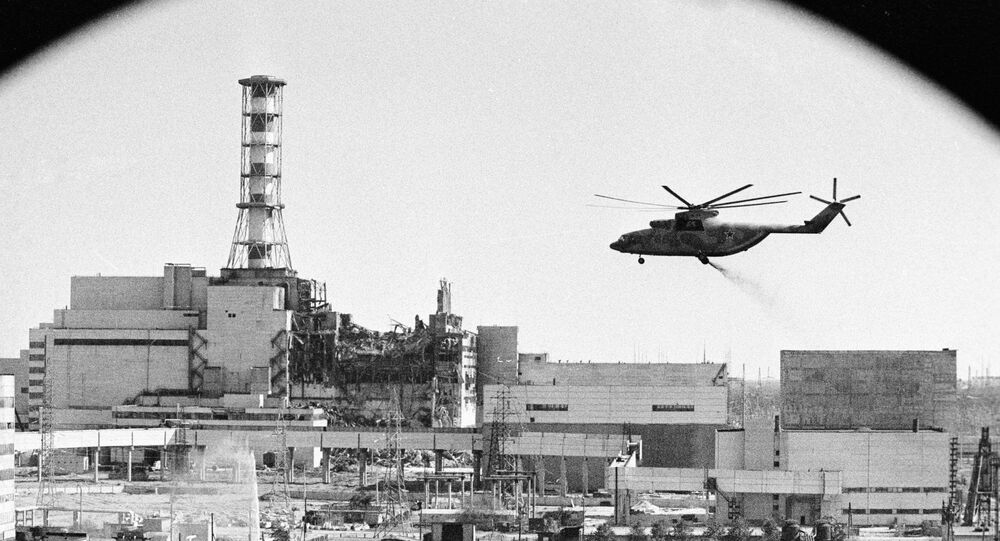 Civil and military personnel were called upon to deal with the consequences of the 1986 Chernobyl nuclear disaster and over 600,000 of them have since been given the honorary status of “Chernobyl liquidators.”

Thirty-two years after the accident, Sputnik met with two such “liquidators” – helicopter pilots Alexander Petrov and Sergei Zharkov — and asked them to share their impressions of the first hectic days of the clean-up work.

Helicopters were used to douse radiation absorbing-sand on the crippled Reactor No. 4 with each rotorcraft dumping several tons of the special substance on the facility.

"Our crew was dumping lead on the reactor, lead slabs, 40 kilos each. We took a parachute, cut off the lines and tied a slab to each line and sent it floating down. We loaded up to seven tons  for each sortie, went 200 meters up, flew right over the reactor and a lookout sitting on the rooftop told us when to dump. That’s how we worked, flying around in a circle,” Sergei Zharkov recalled.

Alexander Petrov recalled that the weather was warm and sunny and the local people refused to leave their homes.

© Sputnik / Igor Kostin
Chernobyl Nuclear Disaster 32 Years Ago: What You Need to Know
"People ignored radiation alerts and refused to move out of the contaminated area. Older people remembered how it was during the war, the explosions and bombings and could see nothing like that happening now. Grannies simply went to their gardens to plant potatoes,” he said.

He  added that it was a logistical  nightmare as nothing like that had ever happened before and so there was no way to avoid mistakes and quickly deactivate the reactor.

“It took us more than 24 hours to get things going. As for other things, in the Soviet days everything was done fast, materials, everything was  delivered right away. At first, our commanders didn’t know what to do. We flew out to see what was happening, then returned to Chernigov and flew back in the morning. Closer to dinner time they hauled in several containers that opened like an excavator bucket. We fastened them to the helicopters, filled them with sand, flew to the destroyed reactor and, hovering over it, dumped our load. Two days later we were already working with clockwork precision.”

Alexander Petrov said aviation was the first to arrive at the site of the accident.

“They sent in dozens of choppers, all types of them. There were so many of them that we had to wait in line to get loaded.”

When asked about his strongest impressions from that mission, Sergei Zharkov said that he was fully aware of what was going on even though it did not look like a disaster movie.

“It was just ordinary, routine work. No one told us ‘you will be heroes’ or something like that. We just kept on working and didn’t hear that anyone had backed off. I realized the magnitude of the whole thing but we still hoped that somehow it wouldn’t happen to us. We knew what a nuclear threat and radiation are all about; we had been trained to deal with such things in the army. The only thing that told us that radiation was there was the metallic taste in my mouth when I was boarding the helicopter,” Zharkov recalled.

Chernobyl "liquidators" and their families have benefited from tax breaks, cheap re-housing, enhanced pensions and other privileges over the years.

The April 26, 1986 Chernobyl disaster is widely considered the worst nuclear accident at a civilian power plant.

Nearly 8.4 million residents of Belarus, Ukraine and Russia were exposed to radiation and more than 400,000 were relocated from heavily polluted territories.

As many 4,000 people were killed by the disaster or are continuing to perish from the aftereffects, mostly due to cancer, according to the World Health Organization.

Greenpeace says that as many as 10 million people were affected by radiation from the catastrophe.