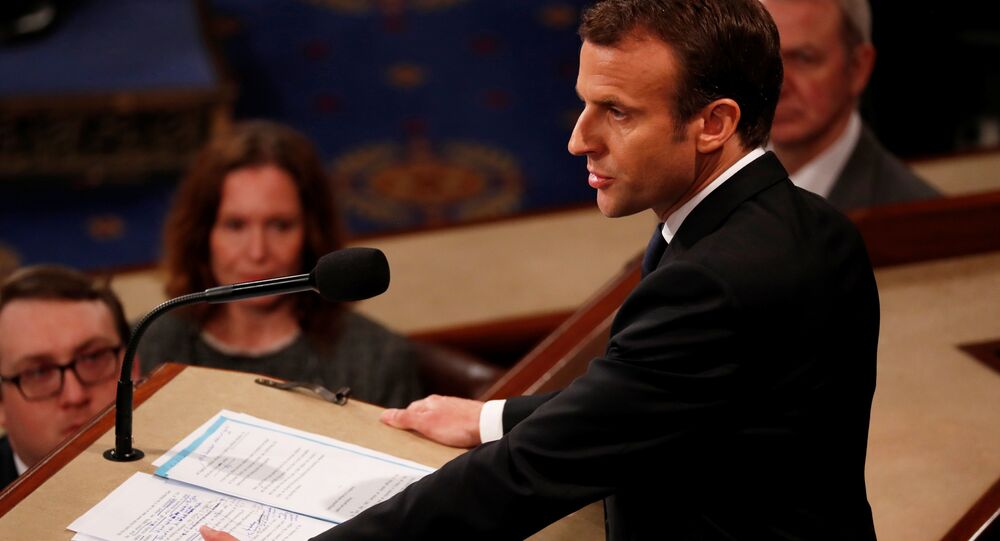 Earlier on Tuesday, the French president said after the meeting with his US counterpart Donald Trump that Paris wants to work on a new nuclear deal with Iran.

Speaking before the US Congress, Emmanuel Macron said that France is not going to withdraw from the Iranian nuclear deal — also known as the Joint Comprehensive Plan of Action (JCPOA) — which was signed in 2015.

The comment comes after statements from the US State Department and EU foreign police chief Federica Mogherini, who reiterated their commitment to the agreement.

At a joint presser with Donald Trump on Tuesday, he urged the US president not to "tear apart" the current deal, instead advising to build on it to develop a broader deal. He noted that Paris wanted to work on a new nuclear deal with Iran that would include international players like Russia and Turkey.

US President Donald Trump has consistently been criticizing the 2015 deal, which was inked by Iran, the European Union and the P5+1 group (the United States, Russia, China, France, and the United Kingdom plus Germany). He called the accord, which stipulates the gradual lifting of anti-Tehran sanctions in exchange for Iran maintaining the peaceful nature of its nuclear program, the “worst deal ever.”

© REUTERS / SYRIA TV
Trump Thanks Macron for 'Steadfast Partnership' in US-Led Strikes on Syria
In late October, US President Donald Trump refused to re-certify the nuclear deal, accusing Tehran of violating the spirit of the agreement. Despite the fact that Trump decided not to contest Tehran's compliance with the deal at the international level, he did not exclude a possible withdrawal from the accord if the agreement was not improved. Other JCPOA signatories called on the United States to comply with the agreement's provisions, saying that the deal had yielded results and was non-negotiable.
...
Reddit
Google+
Blogger
Pinterest
StumbleUpon
Telegram
WhatsApp
129