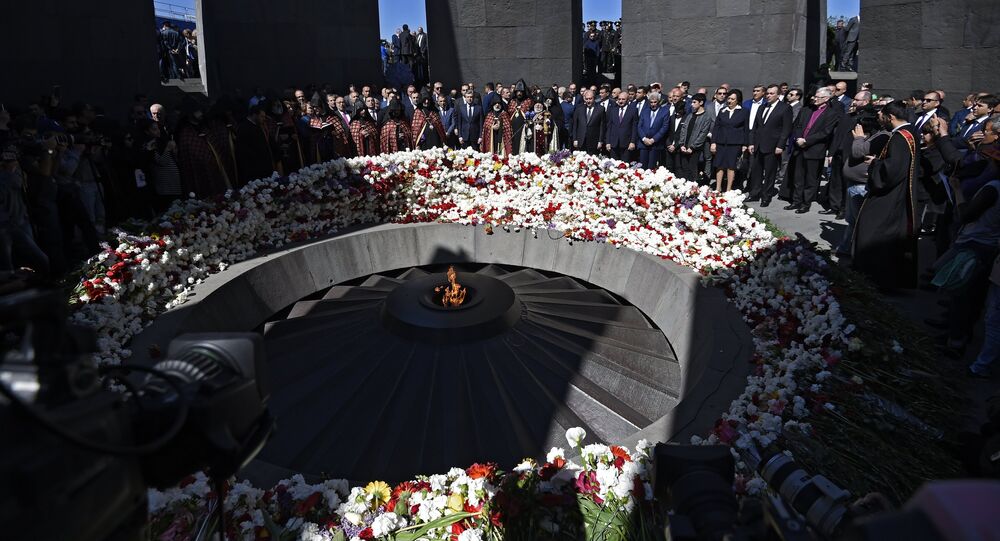 YEREVAN (Sputnik) - Hundreds of residents of the Armenian capital are taking part in Tuesday commemorative events dedicated to the anniversary of the genocide of Armenians, a Sputnik correspondent reported.

On Tuesday, the Armenians honor the memory of people killed in the genocide, which started in Ottoman Empire in 1915.

Several thousands of Armenians have already gathered on the outskirts of Yerevan at the Tsitsernakaberd memorial dedicated to the victims of the genocide.

​At the same time, hundreds of people are participating in a procession moving from the central square of the Armenian capital toward Tsitsernakaberd.

© Sputnik / Asatur Yesayants
Armenian President Armen Sargsyan, center, during the ceremony of laying flowers at the eternal flame at the Armenian Genocide Victims Memorial in Yerevan

The Armenian-Turkish relations are negatively influenced by what is recognized as the genocide of Armenians by Armenia and dozens of other countries. Around 1.2 million Armenians were killed or starved to death by the Ottoman Empire during and after World War I. Turkey has repeatedly denied accusations of committing mass murder of Armenians, claiming that the victims of the tragedy were both Turks and Armenians.