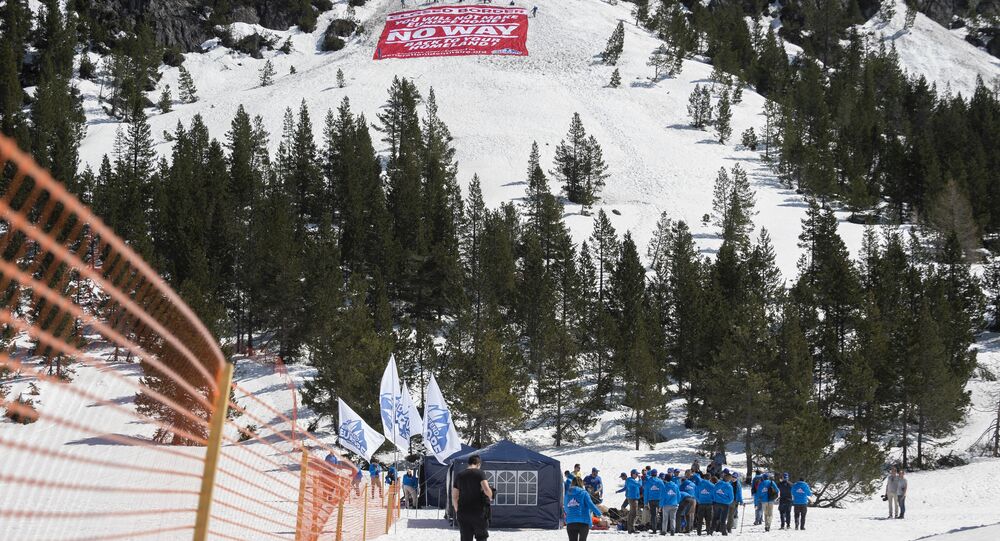 MOSCOW (Sputnik) - French Interior Minister Gerard Collomb has condemned the recent action of anti-immigration activists, who prevented undocumented migrants coming from Italy from crossing a high altitude mountain pass into France, as well as the retaliatory pro-migrant march, according to the ministry's press release.

"[Collomb] vigorously condemns the intimidations, provocations and incidents caused by activists of the extreme right and extreme left in the department of the High Alps this week-end … Consequently, important reinforcements of police and gendarmerie from the neighboring departments will be put in place tonight, in order to lend their support, with the necessary restraint, to the forces already in place and to ensure the absolute respect for the border control," the Interior Ministry said in a press release on Sunday evening.

According to local media, the anti-migrant protesters left the pass on Sunday afternoon, while those who supported immigration marched down on foot toward Briancon refugee center, supervised by the police.

Identity Generation itself characterized the action as successful, pledging to continue its fight against illegal migration.

© AP Photo / Lionel Cironneau
France vs Italy in Border Row: Refugees 'Come and Go to Return Next Day'
Late Saturday and early Sunday, activists from a small French right-wing group, "Generation identitaire" (Identity Generation), blocked a key mountain pass some six kilometers (3.7 miles) from the Italian border which they said was a "strategic point for illegal migrants." Group members also hung a giant banner on the mountainside to "notify" migrants that the border was closed to them. Later in the day, pro-migrant activists organized a rally in response to the right-wing group, escorting some 30 migrants to France. As the tensions started rising, confrontations between the group and migrants began, and police officers were sent to the area to restore order.

TWEET: The filled migrants center in Briançon, where 20 refugees have already been accommodated, before the arrival of migrants, accompanied by NoBorders activists.

TWEET: Activists of the Italian movement NoBorder passed a column of migrants to Montgenevre. The cars were waiting for them, the police watched passively. This is obviously an anti-fascist operation directed against @DefendEuropeID & #StopMigrantAlpes.

TWEET: Italian antifascists accompany the convoy of migrants in Montgenevre, opposing the operation #StopMigrantAlpes de @DefendEuropeID. Migrants are waiting for cars to take them to Briançon.

Since 2015, Europe has been experiencing its worst migration crisis in recent history as it struggles to accommodate hundreds of thousands of refugees and migrants fleeing hostilities in the Middle East and North Africa. Italy and Greece have been the main entry points for migrants.

The French Alps have recently experienced a sharp increase in arrivals of undocumented migrants, who are looking to reach the most developed European countries. According to the authorities, 1,900 illegal immigrants were sent back to Italy in 2017, compared to 315 the previous year.

France vs Italy in Border Row: Refugees 'Come and Go to Return Next Day'