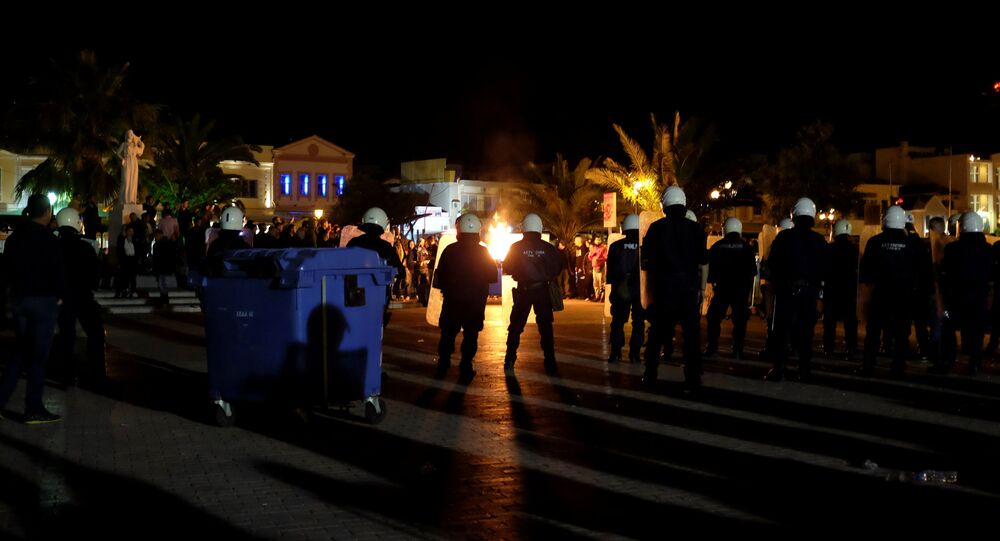 Migrants, most of whom are Afghans, took to the main square of the city of Mytilene on the Greek island of Lesbos on Wednesday, demanding for improved living conditions and transport to European countries.

Clashes, which erupted between nationalists, migrants and the police in the central Sappho square in Mytilene on the Greek island of Lesbos on April 22, continued for the whole night and, according to the police, left about a dozen of people injured. Only in the morning did the police manage to force the migrants to return to their camps, Greek news agency AMNA reported.

The violence broke out late on Sunday after about 200 members of the radical Patriotic Movement attacked migrants with firecrackers, stones and bottles, claiming that it was impossible to live on the island after their arrival. Soon left-wing groups joined the fight, backing the migrants and heightening tensions even more.

© AFP 2020 / ROMAIN LAFABREGUE
'Rebel Against Migration': Defend Europe Group Blocks France-Italy Border Areas (PHOTO, VIDEO)
In order to de-escalate the unrest, police forces had to use tear gas to disperse the protesters. Early in the morning police buses drove migrants away from the city center to a refugee camp.

The mayor of Lesbos, Spyros Galinos, accused the authorities of intervening too late and doing nothing to improve the situation.

Over recent months, the flow of migrants from Turkey to Greece has increased dramatically. Every day hundreds of people come to Lesbos, which results in refugee camps being overcrowded.

"Now there are about 10,000 people in Lesbos who filed a request for asylum, whereas there are 27,000 residents in the city. Our island once again has become a hostage," the mayor said.

Around 500 Migrants Rescued Off Libyan Coast in Mediterranean Sea