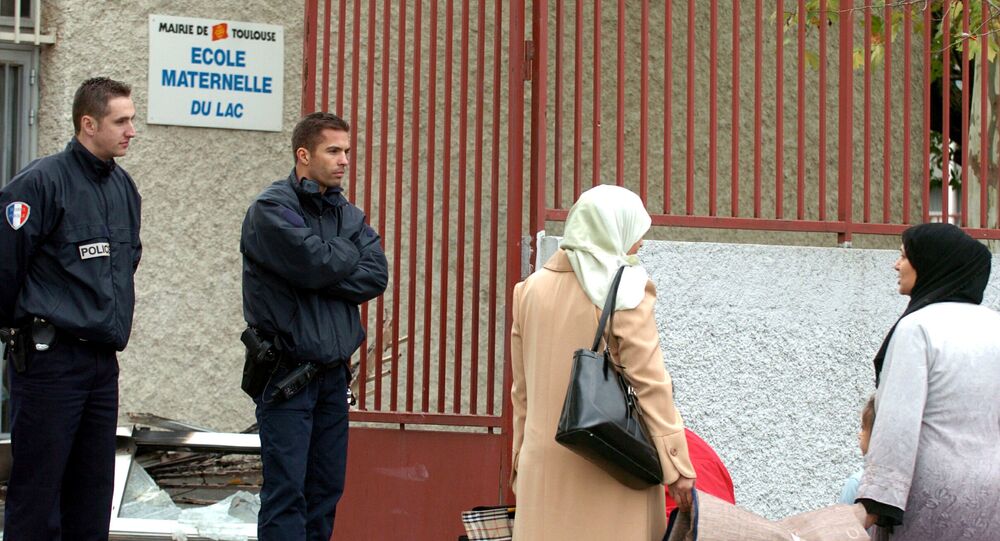 Disturbances erupted on April 15 in the Le Mirail area of the southern French city of Toulouse. Activist accuses local gangs of aligning with Islamists.

Rioting is still underway in Le Mirail, the home neighborhood of Mohammed Mera, who committed a series of gun attacks in 2012, targeting first French Army soldiers and later children and a teacher from a Jewish school in the cities of Montauban and Toulouse, killing seven people and wounding five.

While mainstream media blames social woes, Fatiha Boudjahla, a teacher and activist from Toulouse, told Sputnik in an interview that gang leaders in an isolated community have concluded an alliance of convenience with Islamists in order to oust local police from the districts and remind everyone that French laws do not apply to this territory.

"We are witnessing a so-called territorialization, exercising authority over a certain territory. That is why they are rioting. It is not about police interfering, it is about police daring to consider its presence in such districts legitimate," she said.

© AFP 2020 / PASCAL GUYOT
'This Is Not France': Frenchman Renounces Citizenship to Protest Attack on Syria
According to media reports, clashes were triggered by rumors that guards were responsible for the death of an inmate in the nearby Seysses prison on April 15. Further unrest was caused following the detention of a woman stopped by police in the Toulouse district of Bellefontaine during a routine identity check the next day, after she refused to remove her Islamic full-face veil.

Boudjahla — co-founder of the Viv(r)e la République movement advocating for equal rights and opposing "any kind of bigotry," and author of the book Féminisme, Tolérance, Racisme, Culture: Le Grand Détournement  - believes those incidents were used as an excuse by gangsters aligned with the "bearded guys" to "prevent police from being present on the territory which reminds them that French laws still apply there."

​"I believe that not a single family living in Le Mirail supports these clashes […] Residents of these districts have become hostage to the situation," she asserted.

Boudjahla added that instigators of the unrest are taking advantage of demonstrations against police across the country — in Notre-Dame-des-Landes, in universities occupied by students and in urban districts.

"Authorities tend to concede to protesters when disturbance of public peace becomes too serious," Boudjahla said, noting that it is unlikely French President Emmanuel Macron will be able to turn the tide.

​According to the activist, France's current head of state remains an "amateur," and a "bourgeois" from central districts who, along with his inner circle, will be unable to solve the problems of deprived neighborhoods.

"This man doesn't know deprived neighborhoods. He has surrounded himself with high society advisers, and his idea of deprived areas will match the stereotypes of a ‘bourgeois' and a pseudo-intellectual," Boudjahla stated.