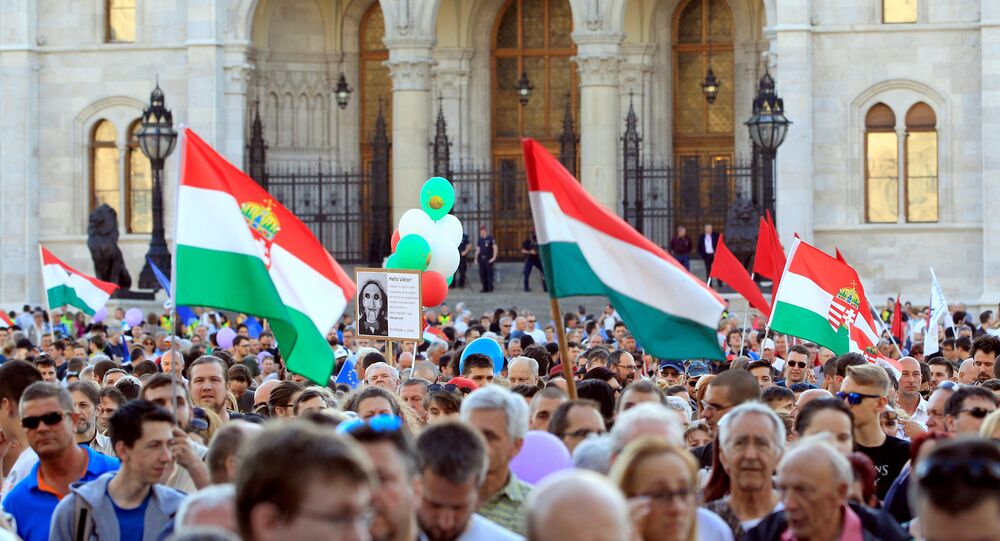 A protest is now sweeping across Budapest, for the second time after Premier Viktor Orban, head of the ruling right-wing party, entered his third term.

Soon after Orban's Fidesz party came to power in 2010, the parliament adopted new media legislation. It essentially required that all media outlets register with the state and that their output should be "balanced", of "relevance to the citizens of Hungary" and "respect human dignity," which was meant to curb the illegal flow of immigrants and stand on guard of ethnic Hungarians in the country and beyond.

Thousands of Hungarians took to the streets in Budapest on Saturday protesting against what they claim is state control over the media.

"Our main goal is to dismantle Fidesz control over the public media… but opposition parties also have a task as they are also responsible for this situation we are in," protesters stated on Facebook.

Deja-vu: second major anti-Orbán demo in Budapest since his election win, numbers look down on last Sat but still big, this one protesting the "disinformation" state media pic.twitter.com/xShNQA28gM

Maybe more than 80.000 after all. I guess Orban has really lost Budapest. Cant see him getting it back pic.twitter.com/0VDolV9uzH

It is the second time the Hungarian capital saw a mass protest against the ruling Fidesz party since the April 8 election. Demonstrators urged the remaining opposition parties to join efforts to counter the right-wing Fidesz party, which now dominates the parliament.

Orban entered a third consecutive term in early April after his strong anti-immigration campaign. The government said it continues working on legislation to curb the illegal flow of immigrants.