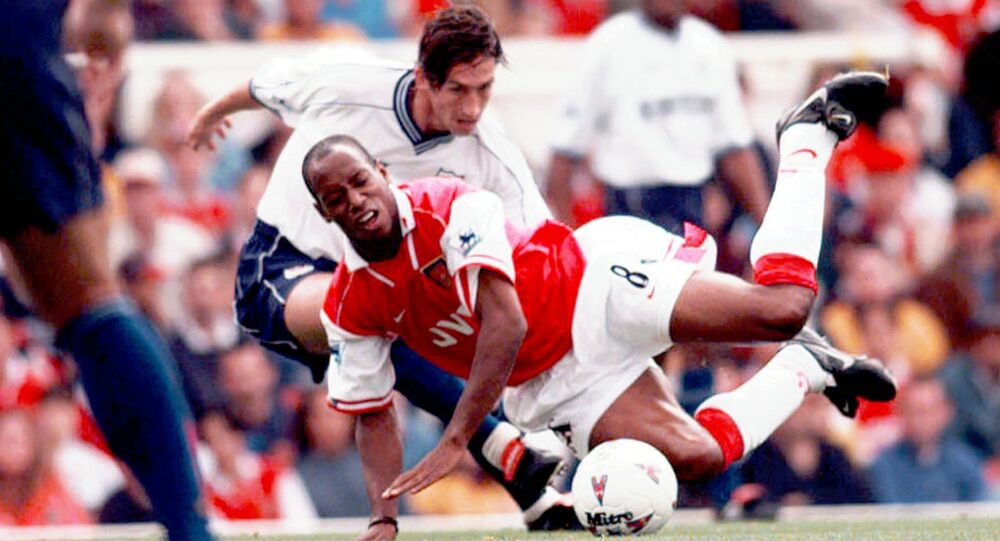 So Long and Thanks for All the Trophies: Arsène Wenger's Glory Years at Arsenal

Arsenal's French manager Arsène Wenger has announced he is to leave the club at the end of this season after 22 years at the helm. Sputnik looks back at some of the best players he brought to the club and some of his most triumphant moments.

Younger Arsenal fans have only known one manager in charge of their team and, although in recent years there have been increasing calls for him to go, he has given them some of their greatest memories.

After news of his departure broke on Friday, April 20, social media was flooded with messages of love and support for Wenger, who came to the club in October 1996 after a brief spell coaching in Japan.

Where it all began for Arsene Wenger in the #PL… pic.twitter.com/gbhqBu9LTq

Wenger had created a great team at Monaco, including legendary striker George Weah — now the President of Liberia — and he recruited so well in his first 24 months at Arsenal that they won the Premier League and FA Cup double in 1998, a feat he would repeat in 2002.

Even his old rival Sir Alex Ferguson, the former boss of Manchester United, paid tribute to his "professionalism, talent and determination."

Thierry Henry, who had his greatest years under Wenger at Arsenal, said he left an "untouchable legacy."

6 years of the most enjoyable successful football of my career. Thank you Arsene. A club legend👏🏻👏🏻👏🏻👏🏻👏🏻👏🏻

Henry was in the team — dubbed The Invincibles — who went through the entire 2003-04 season without a single defeat.

But unlike Ferguson, Wenger was unable to lead Arsenal to the greatest glory, falling short in the 2006 Champions' League final against Barcelona.

Arsenal led that game 1-0, with a goal from Sol Campbell, but Samuel Eto'o equalized with 15 minutes to go and a second Barca goal five minutes later broke the Gunners' hearts.

#OnThisDay in 2006: Highbury celebrates "Dennis Bergkamp Day". Fittingly, the Dutchman comes on as sub and scores a classic to seal a 3-1 win over WBA. It was his last competitive goal for Arsenal. pic.twitter.com/3LcS93XgD9

Wenger inherited a pretty good Arsenal team, including goalkeeper David Seaman, defender Tony Adams, striker Ian Wright and several other players who had won the title under George Graham in 1991.

But he got rid of players like England international David Platt and Welsh striker John Hartson, who did not fit in to his style of play, and replaced them with French midfielder Emmanuel Petit and forward Nicolas Anelka.

Congratulations on an incredible 22-year career at Arsenal, Arsene Wenger, and best of luck for the rest of the season… apart from on your 60th game against us next Sunday 😉

​Two players — Dennis Bergkamp and Patrick Vieira — who had been bought by his predecessor Bruce Rioch were also to become key members of Wenger's squad. Vieira is among those being tipped to succeed Wenger as manager.

He revolutionized matters behind the scene, rooting out the club's drinking culture and forcing players to think more about nutrition and isotonic exercise.

But his greatest was probably Henry, who had been a bit-part player at Juventus, but would score an astonishing 174 goals in 254 games for Arsenal.

Pep Guardiola: “Arsene Wenger has all my respect. The Premier League is the Premier
League because of him and what he has done.” pic.twitter.com/DfU2lprz5o

Arsenal moved from their old home, Highbury, to the Emirates Stadium in 2006 and the cost of the new ground arguably hit the amount the board gave Wenger to invest in new players.

From then on Arsenal would never get close to winning the Premier League title but their fans were given the consolation of FA Cup victories in 2014, 2015 and 2017.

With five games to play in this Premier League season — and a Europa League semi-final against Atletico Madrid to come — Wenger has so far managed Arsenal for 823 games, winning 473 of them and his players have scored 1,549 goals.

Jose on Arsene Wenger: "I always wish the best for my opponents. If he looks forward to the next chapter of his career in his life, I'm really happy for him." #MUFC pic.twitter.com/KZiuRONNgL

Wenger, who obtained an economics degree in 1974, was a lanky but mediocre midfielder with Mulhouse and Strasbourg before turning to coaching in 1981.

After a spell in charge of Nancy, he moved to Monaco, where he made his name, winning the title with two English players in his team — silky midfielder Glenn Hoddle and striker Mark Hateley, who nabbed 22 goals in 59 games.

He left Monaco and coached Nagoya Grampus Eight in the new Japanese J-League, before being headhunted by Arsenal.

His last game as Arsenal manager will be away at Huddersfield on May 13….unless he is able to get the Gunners into the Europa League final, which takes place three days later.