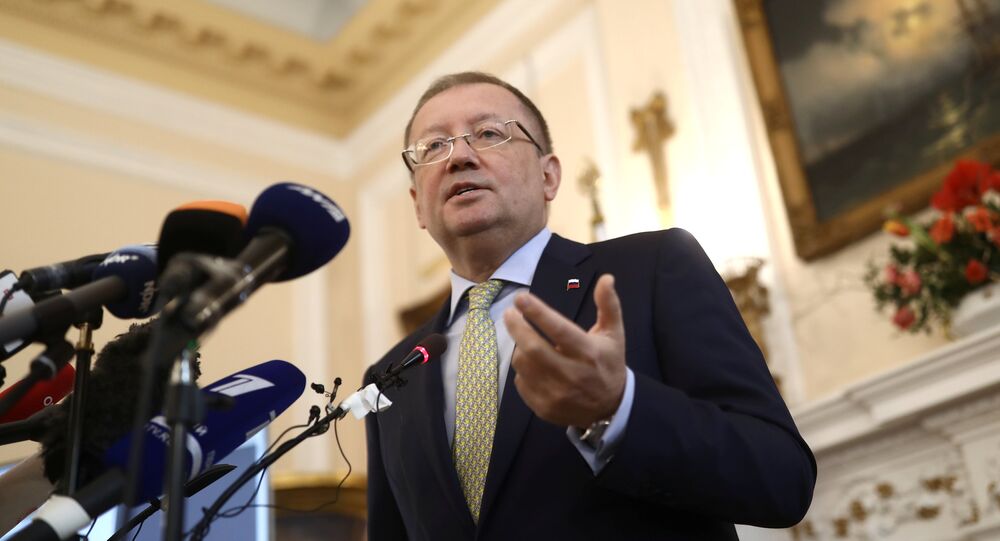 Russian Ambassador Alexander Yakovenko held a press conference with journalists at the Russian Embassy in London on April 20, discussing a number of pressing issues in Russian-UK relations.

Ambassador Yakovenko kicked off his briefing on Syria with video of the testimony of a boy featured in a White Helmets' clip as an example of the kinds of fakes used to accuse the Syrian government of using chemical weapons in Douma.

According to the ambassador, Prime Minister Theresa May's pretext of 'humanitarian intervention' as the justification for the missile strikes in Syria on April 14 "hold no water." Yakovenko pointed out that the international community had not received substantive evidence of the use of chemical weapons. Russia, he said, was "interested in a fair investigation" by the Organization for the Prohibition of Chemical Weapons (OPCW) in Syria.

Yakovenko said that the civilian casualties from the US, French and British strike would have been unimaginable had Syrian air defenses not managed to shoot down 71 of the missiles, discrediting the UK's justification that the strikes were a 'measured response' to Syria's alleged chemical weapons use. Furthermore, he said, the strikes did not constitute self-defense by the UK, and were not authorized by the UN Security Council.

We want a world based on international law — Russian Ambassador to the UK @Amb_Yakovenko during press conference on #Syria, #Skripals https://t.co/JB9aNHTcrZ pic.twitter.com/nt8aYrakmL

The ambassador also pointed out that among the three alleged 'chemical weapons' sites hit by the US-led coalition, none showed signs of contamination following the attack. This, he said, confirms that the pretext of chemical weapons use by the government was false.

After the #airstrikes by US, UK, France in #Syria there was no contamination of the surrounding area, leading us to conclude that the pretext to the strikes was false https://t.co/JB9aNHTcrZ pic.twitter.com/KEz54UbWYm

Yakovenko added that when Russian military police were deployed to Douma, they could not find any evidence of chemical weapons use.

Turning to the Skripal case, the ambassador reiterated that London is continuing to ignore Moscow's legitimate requests for information regarding the status of Sergei and Yulia. According to Yakovenko, the UK investigation's deliberate destruction of evidence, including the euthanization of Mr. Skripal's pets, is making a transparent investigation impossible.

Yulia #Skripal’s cousin tries to get visa to Britain, she was refused and UK authorities declining the possibility — @Amb_Yakovenko on details of Skripal case https://t.co/JB9aNHTcrZ pic.twitter.com/JsTMEuTRVI

Russian Ambassador to Britain on nature of the substance used in the #Skripal poisoning case https://t.co/JB9aNHTcrZ pic.twitter.com/udT3tFia7L

Russia will not reach any conclusions in the Skripal case until it receives access to the victims, the entirety of the investigative materials at the UK's disposal, and the ability to participate in the investigation, the ambassador said.

At the moment, Moscow continues to see the Skripals' disappearance from public view as evidence that they may have been abducted by the British side, Yakovenko said, pointing to the fact that it has been well over a month since the poisoning, and no material evidence of their condition has been made publicly available.

Russia’s Ambassador to UK: #Russia wont take at face value any conclusions on #Skripal case until we get access to the victims https://t.co/JB9aNHTcrZ pic.twitter.com/8XwSzn2CLc

Why is it a problem to meet Yulia #Skripal in person, talk to her? We want answers — @Amb_Yakovenko @RussianEmbassy https://t.co/JB9aNHTcrZ pic.twitter.com/xkGKH1a2Mn

As far as the OPCW report released last week was concerned, Yakovenko noted that report was not concluded in accordance with Chemical Weapons Convention standards. "The work of the OPCW experts were conducted under the control of the British side. Pressure on them cannot be ruled out. They checked only the sites designated by the UK beforehand," the ambassador said.

All this was a sign that the Skripal case was a provocation against Russia, he added, with Moscow blamed for the attack "almost the next day," without any evidence provided.

Absence of dialogue by the British side on #Skripal case makes us think something is wrong and conclude that it was a huge provocation against #Russia — @Amb_Yakovenko in London https://t.co/JB9aNHTcrZ pic.twitter.com/L1klKsovIj

The ambassador reiterated a sentiment he expressed at last week's press conference, urging the British media to ask the government to arrange a meeting with the Skripals as evidence of their status. He also encouraged the public to ask their government more questions. "We need more transparency," he said.

Why don’t UK journalists request a public press conference with the #Skripals in the interests of transparency? Russia’s @Amb_Yakovenko https://t.co/JB9aNHTcrZ pic.twitter.com/uK5VupLKOb

© AFP 2021 / Yuri KADOBNOV
Lavrov on US Claims of Russia Hampering Work of OPCW in Douma: 'Show Us Evidence' (VIDEO)
The British government has repeatedly accused Russia of carrying out cyberattacks without presenting any evidence, Yakovenko said. Furthermore, he noted, in recent days there have been numerous calls in the UK's media about the need to prepare for an 'inevitable' Russian cyberattack, again without any proof being presented.

The ambassador recalled that on April 11, Home Secretary Amber Rudd claimed that the UK's National Cybersecurity Center had reported 49 incidents associated with Russian cyber groups allegedly targeting energy, telecommunications and media. Russia is "disappointed that such serious claims have been made publically, without any proof being presented and without any attempt by the United Kingdom to clarify the situation with the Russian side." This was a "reckless, provocative and unfounded policy," he said.

According to the ambassador, the impression Moscow gets today is that the British public is being prepared for a massive cyberattack by the UK against Russia, and that such an attack may then be presented as a "response, but will in fact constitute the unprovoked use of force." Evidence of this possibility includes the fact that Prime Minister May did not publicly reject the possibility of deploying the UK's offensive cyberwarfare capabilities against Russia in her statement on March 14, he said.

Presenting allegations of #cybersecurity threats posed by Russia in the UK publicly, without any proof is reckless, provocative and unfounded policy — @Amb_Yakovenko https://t.co/JB9aNHTcrZ pic.twitter.com/PeNxcNuEdp