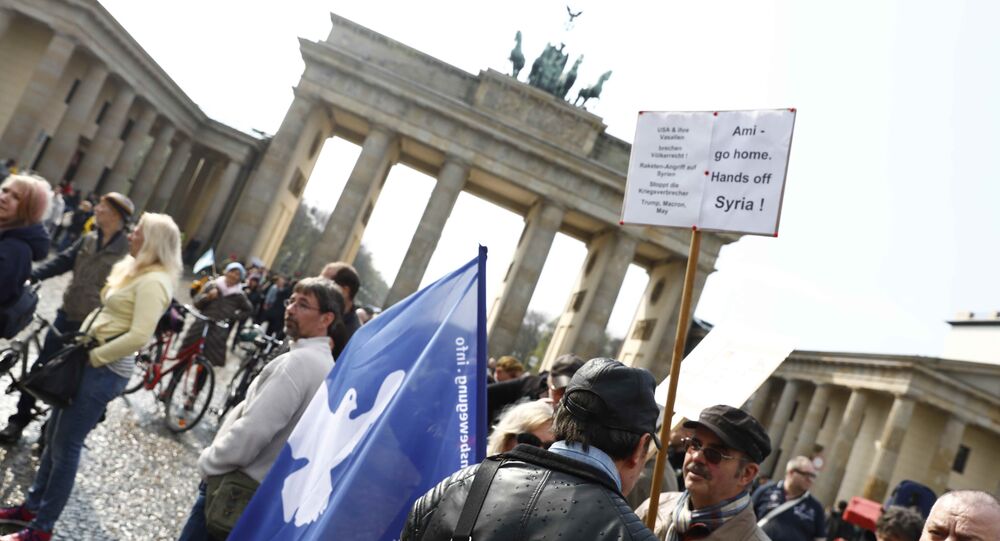 MOSCOW (Sputnik) - Approximately 1,500 Germans took to the streets of Berlin on Wednesday to protest against the US-led strikes on Syria and call for an end to war, Alexander Neu, a member of the Bundestag from the left-wing Die Linke party, which organized the protests, told Sputnik on Thursday.

Germany welcomed the joint actions taken by its US, UK and French allies against Syria on April 14 in response to the alleged chemical weapons attack in the Damascus suburb of Duma. The German authorities stressed that this military strike was necessary to support the effectiveness of the international boycott of the use of chemical weapons by the Syrian government. However, Berlin chose to refrain from participating in the military operation itself.

"Yesterday, about 1,500 people participated in the protests in Berlin. It doesn't sound like a lot of people but if you consider that it was organized very spontaneously, it is a big number," Neu said, recounting how the party’s leaders and activists waved peace flags and called for an end to war in front of the Brandenburg Gate.

Neu, who is a member of the German Bundestag's defense legislative committee, said that Germany refused to join the strikes for fear of protests, since the polls have shown the people’s opposition to steps that may further sour relations with Russia.

"The German government has fully supported the United States, the United Kingdom and France. They did not participate in the military operation because they were afraid of protests in Germany. Eighty percent of Germans want to have better relations with Russia. So they don't want to have tension," the lawmaker said, adding that "the German government was facing a dilemma: on one hand, they want to follow the American line, on the other hand, they need to support the German economy and serve its interests, which are not in line with those of the US."

​The situation around Syria, which has been in a state of civil war since 2011, has escalated recently over the alleged chemical attack on the Damascus suburb of Douma on April 7. The Syrian authorities and Russian military have refuted reports about the attack and dismissed the claims of their complicity in the incident. Despite this, the United States, the United Kingdom and France launched missile strikes on Syria without waiting for the Organization for Prohibition of Chemical Weapons' conclusions on the matter.