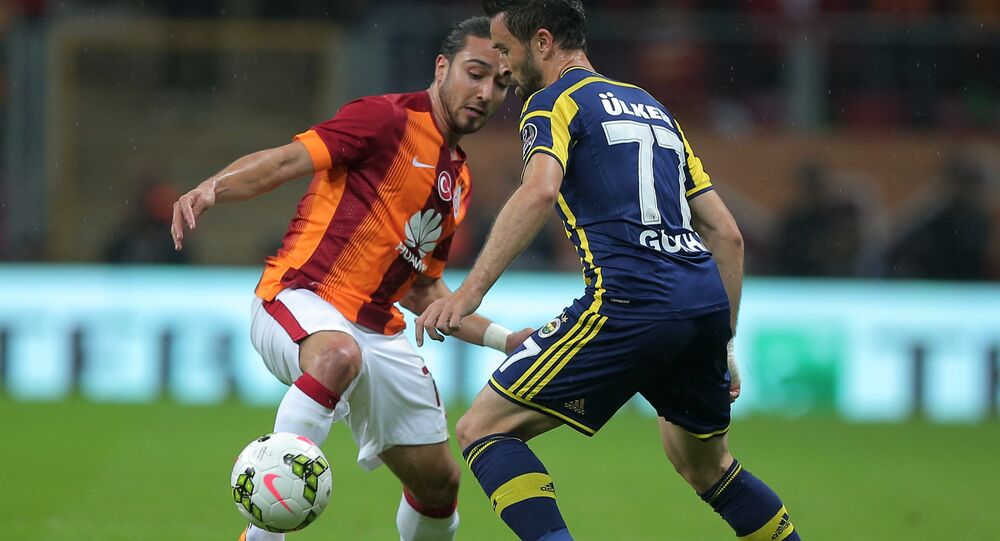 Sporting Wars: What Are The Most Violent Football Derbies in the World?

A policewoman had to undergo eye surgery after a "bomb" exploded at the derby between Bulgaria's bitterest football rivals, CSKA and Levski. Sputnik looks at some of the most violent derbies in world football.

More than 20 Levski Sofia fans were detained on Wednesday, April 18, after trouble flared at a match with their arch-rivals CSKA.

The bomb was hurled from a part of the stadium where Levski fans were segregated.

"Such an act is unforgivable. It's not a firework, it's a bomb. This is an extremely unpleasant and ugly incident. She is still in a bad condition. She underwent surgery but there are many pieces of glass on her face and in the eye," said Sofia police chief commissioner Anton Zlatanov.

The "Eternal Derby", as it is known, has a long history of crowd violence. In 2000 a man was killed by a bomb after the game.

But Bulgaria is not the only country where football derbies trigger strong passions and sometimes violence.

The two biggest clubs in Scotland both hail from Glasgow and are known together as the Old Firm.

📸 What is your favourite Old Firm goal at Hampden? pic.twitter.com/TF4luqPqeY

The rivalry has always been tinged with religious sectarianism as Glasgow Rangers fans traditionally came from Protestant neighborhoods while Celtic — as their name suggests — drew support from Catholics, many of whom were the descendants of Irish immigrants.

The passions on the pitch are shared off the pitch and violence frequently breaks out in the stadium and elsewhere in the city on derby day.

He fled the scen, leaving his Celtic baseball cap behind in the blood-stained garden.

In 1995 Mark Scott was stabbed to death as he walked past a pub full of Rangers fans because he was wearing Celtic colors.

The Old Firm derby was also the cause of one of the worst stadium disasters in British history.

In January 1971 thousands of Rangers fans began to leave Ibrox Stadium after Celtic's Jimmy Johnstone put Celtic 1-0 up in the 89th minute.

When, with seconds remaining, Rangers' Colin Stein equalized hundreds of fans tried to get back up the steps onto the terraces. There was a terrifying crush and 66 people died.

18/04/2018 Germany cup 🇩🇪
Schalke 04 vs. Eintracht Frankfurt
— Fight in the stadium after the match! pic.twitter.com/aIsyMFXZ16

Games between any of the three are likely to be quite spicy but there is a special level of malice when Fenerbahce face Galatasaray.

It is known as the Intercontinental Derby because Fenerbahce hail from the Asian side of the Bosphorus and Galatasaray are based on the European side.

Until 2011 Galatasaray's home was the Ali Sami Yen stadium, which was nicknamed "Hell" and visiting fans were greeted with huge "Welcome to Hell" banners and in 2000 two Leeds fans were killed in a clash with Turkish supporters.

The derby was first played in 1909 but it became much more hostile after an infamous game in 1934.

By the 1990s riot police were regularly called out to keep tabs on the two sets of supporters.

One of the most violent derbies was in May 2013 when Fenerbahce beat their bitterest rivals 2-1.

Clashes broke out after the game and Burak Yildirim, 19, was stabbed to death by a Galatasaray supporter.

Across the Aegean Sea, passions are just as fierce in Greece, where the two biggest teams are Olympiacos Piraeus and Panathinaikos, who come from Athens.

The Greeks not being one to duck hyperbole, the game is known as The Derby of Eternal Enemies.

Between them the two clubs have won every Greek Super League championship since 1994, when AEK of Athens got a look-in.

Nikos Papandopoulos, an Olympiacos fan who lives in London, said the divide was originally class-based, with Olympiacos supporters coming from the working class port town of Piraeus and Panathinaikos fans traditionally being drawn from the upper classes.

"But because of its popularity Olympiacos became the biggest team and now about 50 percent of Greeks are Olympiacos supporters," Mr. Papandopoulos told Sputnik.

He said many teams in Greece had been fined and had points docked and the authorities had even stopped allowing visiting fans into Panathinaikos' stadium.

"The derby is very passionate and they tend to get very violent. People sometimes get carried away. Things aren't great. It's not a pretty picture and the trouble is that football is extremely political and each governments wants to appease the best teams because they have the most fans and those fans are voters so they turn a blind eye and things have escalated to the point where it's not fun to watch games anymore," Mr. Papandopoulos told Sputnik.

There are many fierce rivalries in England, which often burst into violence.

Games between Newcastle and Sunderland in the north-east can be tasty and there is no love lost between Southampton and Portsmouth, Aston Villa and Birmingham and even Brighton and Crystal Palace.

In London too there are fierce rivalries and during the hooligan heydays of the 1980s clashes between Chelsea, Spurs, Arsenal and West Ham fans were numerous.

But there is a special loathing felt between West Ham and Millwall fans.

Sociologists trace the rivalry right back until 1926 and a strike by stevedores in the Royal Docks, in the east end of London.

Most of the dockers were supporters of West Ham, the local club, and they were outraged when dockers from south of the river — mainly Millwall fans — helped break the strike.

The antipathy between the two has been poisonous ever since.

In the 1980s the club's two hooligan firms — West Ham's Inter City Firm (ICF) and Millwall's Headhunters — frequently clashed and they even spawned films like The Football Factory.

In recent years West Ham and Millwall have tended to be in different leagues but in 2009 a cup clash between the two saw widespread violence, which made headline news.

The "superclasico" between Boca Juniors and River Plate — the two biggest teams in Buenos Aires — is Argentina's most famous derby.

Diego Maradona made his name with Boca and the club's rivalry with their cross-city neighbors is legendary.

But in recent years another derby has produced more violence than the superclasico.

Avellaneda is a port city close to Buenos Aires and is home to two clubs, Independiente and Racing.

Racing's Estadio Juan Domingo Peron — named after the late President — is only 200 meters away from Independiente's Estadio Libertadores de América and the passions aroused are intense.

In 2006 British actor and TV presenter Danny Dyer visited the derby, for his TV series The Real Football Factories International, when rioting Racing fans forced the abandonment of a match at Independiente.

Russia, Britain Should 'Work Together' to End Football Violence