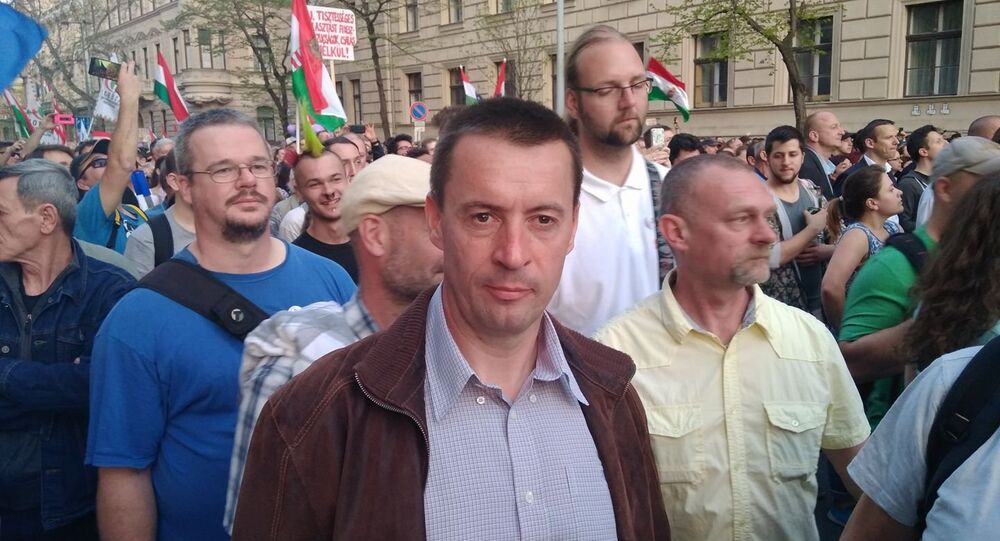 MOSCOW (Sputnik) - Hungarian right-wing opposition party Jobbik, which came in a distant second in the country's parliamentary election, is disappointed with the outcome of the vote, the party’s vice president, Tamas Sneider, told Sputnik.

According to the final results of the April 8 parliamentary election in Hungary, the ruling coalition comprising the Fidesz party and the Christian Democratic People's Party (KDNP), and headed by Prime Minister Viktor Orban received 49.6 percent of the vote, securing 133 out of the 199 seats in parliament. The Jobbik party came in second with 19.19 percent of the vote and just 26 seats.

"The outcomes of the Hungarian election were very disappointing for all the opposition, especially for Jobbik… Despite the fact that we secured 26 seats in the National Assembly… we successfully increased the number of our supporters and became the second largest party in Hungary, we were not victorious in this election," Sneider, who is also the deputy speaker of parliament, said.

Sneider added that the resignation of Jobbik leader Gabor Vona on the day of the vote came as no surprise since he promised to do so if his party lost the election.

"However, replacing a strong, popular leader is difficult to achieve at all times. There are possibilities however and the congress will have to make the decision on this matter," Sneider added.

The reasons for Jobbik's defeat are very simple, according to the politician, since the Fidesz party greatly benefited from its media coverage, which occupied about 90 percent of Hungarian media. The ruling party had also paid under-educated, unskilled people to vote for it, he added.

The Hungarian parliamentary election was held on April 8. The ruling coalition and Jobbik party were followed by the Hungarian Socialist Party (MSZP), which won 19 seats in parliament. The alliance of the left-wing Socialist and Dialogue parties also gained 19 seats, and the Politics Can Be Different (LMP) won seven seats.

© AP Photo / Darko Vojinovic
Thousands Protest Against Hungarian PM Orban's Landslide Victory (VIDEO)
The right-wing Jobbik party came in second with some 20 percent of the vote and 23 seats; the Hungarian Socialist Party (MSZP) came in third with over 12 percent of the vote and 19 seats, the Democratic Coalition (DK) came in fourth with nine seats and the green liberal party Politics Can Be Different (LMP) came in fifth place with seven seats.

The MSZP leadership, as well as LMP co-chair Akos Hadhazy, have also resigned due to the results of the vote.

On Saturday, tens of thousands of people rallied in Budapest to express dissatisfaction with the results of the elections. The demonstration was attended by representatives of several opposition parties.

Leaders of 3 Major Hungarian Parties Step Down After Elections - Reports