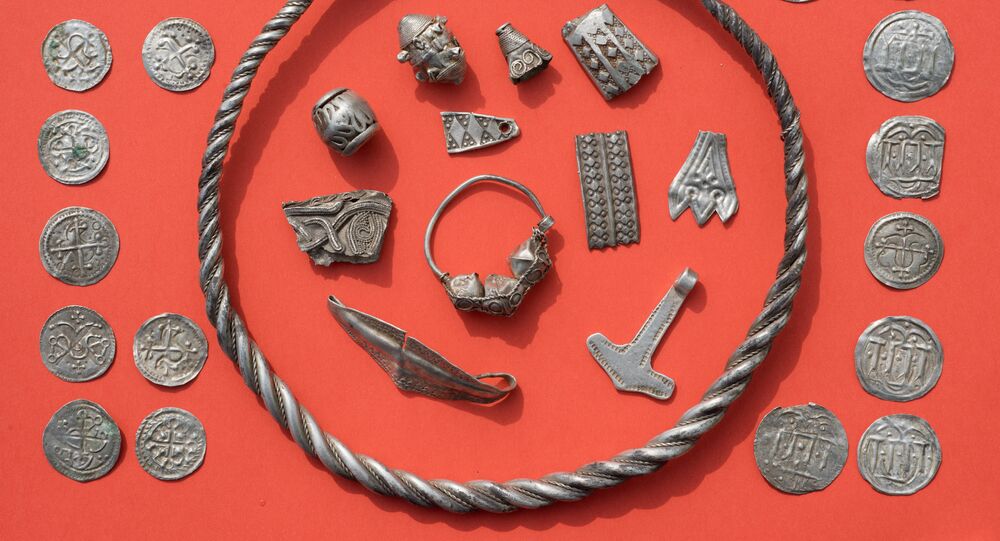 A remarkable finding of silver coins in the massive stash dating back to the Viking era has been made by hobby archeologists. The remarkable chunk of jewelry, some of the largest unearthed in the Baltic Sea area, is believed to have been owned by none other than Harald Bluetooth, the legendary King of the Danes.

A large silver stack dating back to the 900s has been unearthed in northern Germany, Danish Radio reported. Behind the spectacular find on a barren field on the island of Rügen are a group of amateur archeologists joined by their professional peers.

In total, 600 silver coins, necklaces, brooches, beads and rings were dug up.

"This is the single largest find of coins from Harald Bluetooth's time and therefore extremely important," excavation leader Michael Schirren from the State Office for Culture and Historic Preservation said, as quoted by Danish Radio.

The treasure was initially discovered by amateur archaeologist René Schön together with 13-year-old pupil Luca Malaschnitschenko. By their own admission, they first thought it was aluminum waste. The first three coins dating back from the Viking age were unearthed in January, which prompted further comprehensive excavations over 400 square meters without publishing the results of their findings.

© AFP 2020 / Stefan Sauer / dpa
Saxon, Ottonian, Danish and Byzantine coins are pictured on a table in Schaprode, northern Germany on April 13, 2018. A 13-year-old boy and a hobby archaeologist have unearthed a "significant" trove in Germany which may have belonged to the legendary Danish king Harald Bluetooth who brought Christianity to Denmark

​This cache is not the first Viking treasure unearthed on the northeastern coast of Germany. In 1872 and 1874, a large golden decoration in 16 parts was found on the island of Hiddensee in the vicinity of Rügen. The jewelry was also attributed to either Harald Bluetooth or his family.

Although historians warn against hasty conclusions regarding the recent find, much suggests a connection between the previous golden treasure and the current silver stash, as both were buried in uninhabited areas adjacent to Bronze Age burial sites.

​Harald Bluetooth was the son of the first ruler of the Danish kingdom and founder of the Jelling dynasty. During his rule that lasted for several decades, Harald introduced Christianity and consolidated his rule over most of Jutland and Zealand, as well as parts of Norway and present-day Sweden. At the height of the Viking age, the Nordic seafarers founded numerous settlements in what is now Poland, Germany and the Baltic States.

Shortly before his death, Harald Bluetooth was engaged in a bitter feud with his own son Sweyn Forkbeard. According to historians, he decided to bury his jewelry prior to the battle of Helgenæs, which he lost. Wounded, the dethroned ruler moved to the fortress of Jomsborg, which lay at the mouth of the Oder, where he later died.

Incidentally, the Bluetooth wireless technology was named after the legendary Danish king, its logo consisting of runes for Harald Bluethooth's initials.

Origins of the Bluetooth Symbol: named after Harald Bluetooth, a Danish king who was famous for uniting Denmark and Norway, similar to Bluetooth which intended to unite computers and cellphones.https://t.co/8vppbQWhLE #GraphicDesigner #Bluetooth pic.twitter.com/lNKCKhiNiV