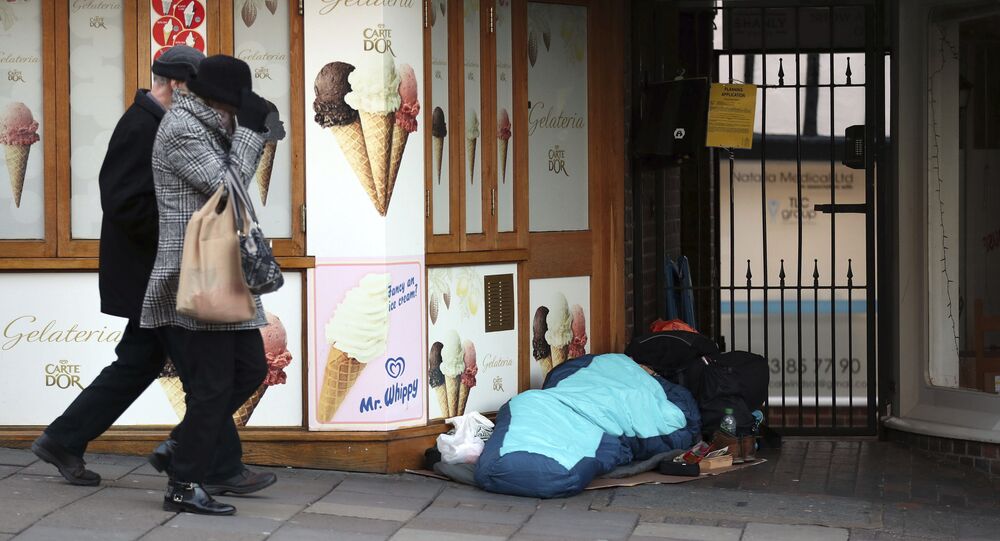 MOSCOW (Sputnik) - Nearly half of UK nationals think that the number of homeless people sleeping on the streets — or rough sleepers — has increased in their local areas in comparison with the situation 10 years ago, a survey by YouGov pollster revealed on Monday.

The issue of homelessness has become acute in the United Kingdom in the recent years. Many experts link the problem to the changes to welfare laws made by the UK government in 2013. People living in social housing had their housing benefits cut by 14 percent if they had a spare bedroom, or by 25 percent if they had two or more, thus creating a hostile environment for homeless people.

© Flickr / Bob Garlick
Indian Bank to Remove ‘Anti-Homeless' Spikes After Causing Twitter Firestorm (PHOTOS)
The proportion of people who have noticed "more" rough sleepers increased to 47 percent in comparison with the 26 percent recorded in the same poll from 2013, according to the survey.

Only 3 percent of respondents said that there were less homeless people in the United Kingdom than in 2013, when 7 percent of people surveyed had this opinion.

At the same time, the poll indicated that the share of people who believed that the level of homelessness was currently "about the same" as 10 years ago stood at 28 percent, in comparison to 40 percent recorded in 2013.

© CC0
Drunk French Mayor Threatened Homeless With Katana - Reports
Asked about how they think people are becoming homeless, 43 percent of respondents said that people end up homeless because of "circumstances beyond their control." However, 27 percent believed that homelessness was caused by "bad life choices."

In January, the UK Ministry of Housing Communities and Local Government confirmed that the number of rough sleepers increased by 15 percent year-on-year in 2017, with London accounting for 24 percent of all homeless people. In order to tackle the ongoing crisis and eliminate homelessness by 2027, the UK authorities in March announced plans to create a special fund worth 30 million pounds ($42 million) as well as a new task force.