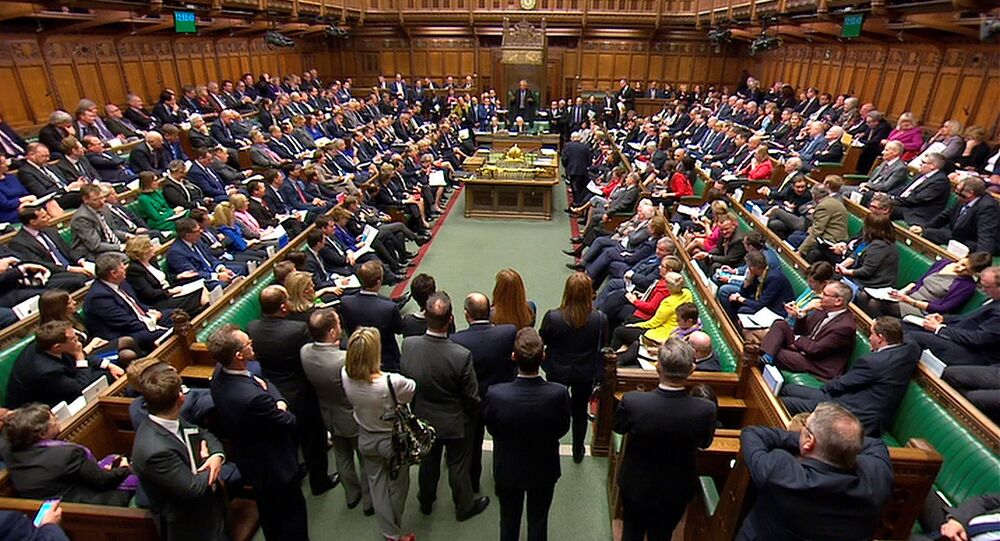 With US President Donald Trump seemingly working towards assembling a military coalition with France and the UK to bomb Syria, there is growing opposition to such a campaign by many Brits, especially if the campaign is launched without a parliamentary vote or any evidence implicating President Bashar al-Assad.

Brits have expressed their disapproval of military intervention against the Syrian Army and other Syrian government forces by writing to and calling their local representatives in the House of Commons, as many others did in the run up to the failed parliamentary vote to attack Syria in 2013.

© REUTERS / Shannon Stapleton
US Intervention Against Syrian Army Could Revive Daesh in Syria – Ex-UKIP Leader
UK Prime Minister Theresa May is now considering launching a military campaign against Syria with the US and France, perhaps without seeking approval from parliament. This has particularly alarmed and angered many Brits, and a number of MPs are now speaking out on their behalf.

Labour Party leader Jeremy Corbyn said "It is vital that parliament has the chance to debate and decide in advance on any government proposals to support a new US-led military intervention in Syria, which risks a dangerous escalation of the conflict," on April 12.

Stewart McDonald, MP for Glasgow South and the Scottish National Party’s (SNP) spokesperson for defense, advised PM May to exercise “extreme caution” in dealing with matter.

“I am not convinced that the retaliatory airstrikes being proposed by the United States is a proper way forward. Though should the UK government wish to participate then it must only do so if the UK parliament gives its consent,” SNP spokesperson and MP Steward McDonald said in a letter on April 11.

Another SNP MP, Ian Blackford, said there “must be a debate and vote in parliament” before any “military action by the UK against Syria” as the British military’s current mandate is to only fight *Daesh terrorists in the Arab state.

If there is any suggestion of military action against Syria by UK, there has to be a debate and vote in Parliament. There is no current mandate for an escalation of activities in Syria beyond challenging Daesch. The UK Govt cannot sanction action without Parliamentary authority.

In a separate tweet on April 11 he described Trump’s rhetoric as “not helpful” and said the Organization for the Prohibition of Chemical Weapons (OPCW) and the World Health Organization (WHO) “must be allowed to their work in Syria ahead of additional steps” by the West.

Meanwhile, Labour MP for East Leeds Richard Burgon expressed his opposition to this “push for war” and said the PM “must call a vote in parliament” before taking action.

The threat of escalation is very real.

I oppose this push for war.

The PM must call a vote in parliament.

Labour MP Luke Pollard also insisted that an escalation of the UK’s military campaign in Syria can only go ahead after a successful vote in parliament and said the PM “should set out clear objectives, strategy and be clear about risk of escalation, mission creep and wider conflict.”

Britain should not participate in military action against Assad without a Parliamentary vote. Ahead of that vote the PM should set out clear objectives, strategy and be clear about risk of escalation, mission creep and wider conflict. #syria

Although there is clearly strong opposition to a military campaign against Syria without a vote in parliament, some former and current politicians have urged the PM to intervene without such a vote, as it is likely to be defeated by the House of Commons.

© AP Photo / Ebrahim Noroozi
Iran Vows to Stand With Damascus Against US and Israeli 'Foreign Aggression'
As with all previous suspected chemical attacks throughout the ongoing conflict, the Syrian government has repeatedly denied any involvement in last weekend’s alleged chemical attack on the city of Douma, and has vowed to defend itself against any aggression by the US and its allies.

Moscow has advised the US against attacking Syria and is calling for an investigation by the OPCW to determine if chemical weapons were indeed used in Douma.