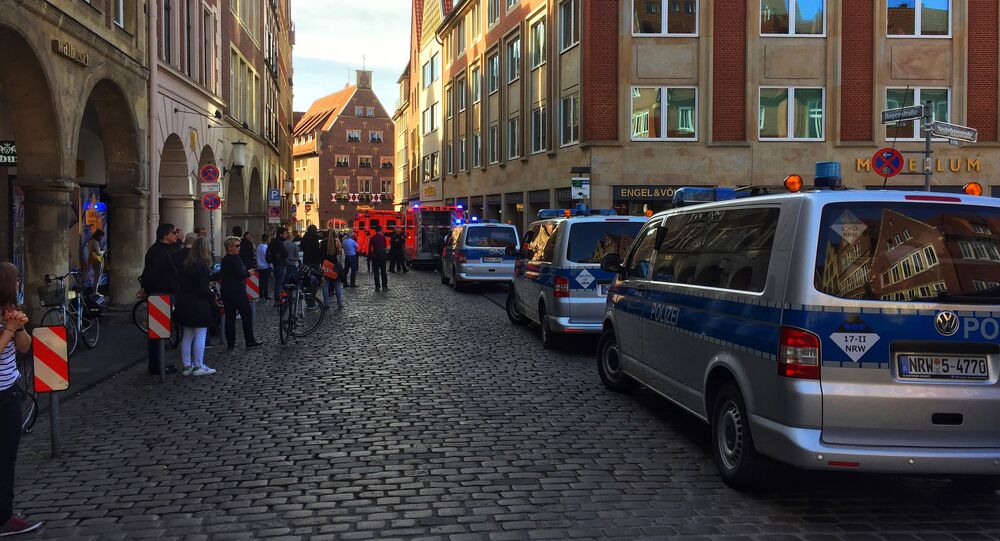 German authorities, including Chancellor Angela Merkel and President Frank-Walter Steinmeier, paid condolences to the victims of a deadly ramming attack in western Germany, while police state that it is too early to speculate if the Saturday incident was a terror attack, according to media reports.

The Interior Ministry of North Rhine-Westphalia has confirmed that three people, including the alleged perpetrator, died after a van drove into a group of seated people in Germany's western town of Muenster on Saturday.

Initially, there were conflicting reports on the number of those injured. German police have confirmed that three people were killed and 20 injured as a van rammed into a group of people in the historical center of Muenster. Media outlets earlier had stated that three to four people had been killed and 30 to 50 people had been injured.

Police said that they were verifying reports from eyewitnesses who reported that an unnamed number of people had exited the vehicle after it rammed the customers of a cafe.

Twitter/Guy Danilowitz
WATCH: California Sheriff Rams Car Into Protester During Stephon Clark Vigil
There was no indication that the attack was linked to Islamic terrorism, according to the interior minister of Northern Rhine Westphalia. The ministry also confirmed that the perpetrator, who shot himself after the attack, was a German citizen. Sueddeutsche Zeitung reported earlier the driver was a 'psychologically disturbed' German citizen with no indication of a terror background. The perpetrator's house was searched for explosives by police, according to the report.

The Rheinishe Post also reported that police were searching for two more attackers allegedly linked to the Muenster ramming. Conflicting reports suggest that police are not looking for accomplices to the attack.

German authorities after being informed of the Muenster ramming incident, issued public statements. German President Frank-Walter Steinmeier extended condolences to the victims of the Muenster attack, calling it a 'disgusting act of violence.' German Chancellor Angela Merkel said that she was "deeply shocked by the terrible events in Muenster."

Images of the attack have been circulating on Twitter.

This is not the first vehicle ramming incident in Germany in recent years. In 2016, 24-year-old Tunisian national Anis Amri drove a truck into people at a Christmas market in Berlin, killing 12 and injuring almost 50.