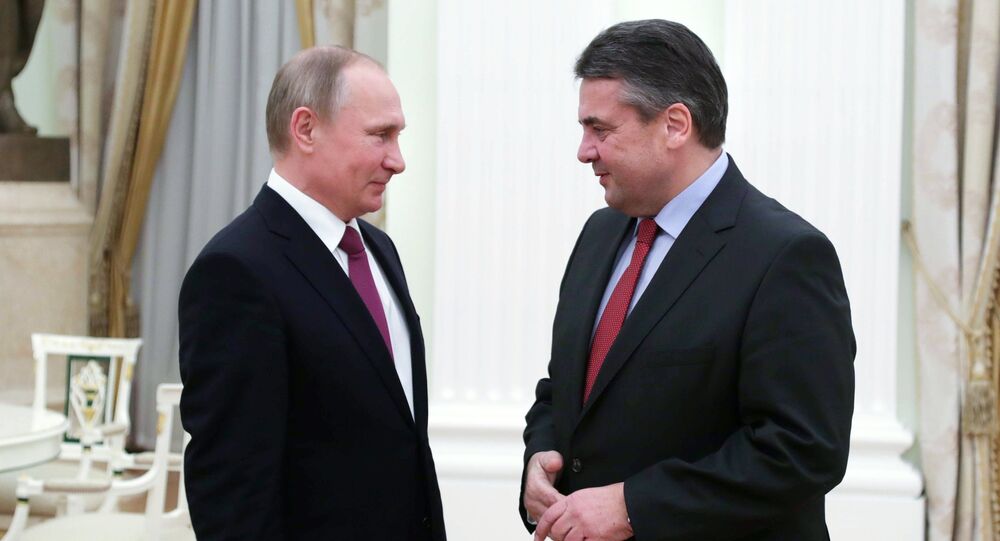 The German tabloid Bild lashed out at Sigmar Gabriel for the speech he made after leaving the post of Foreign Minister. According to the politician, he is for a "balanced German attitude" towards Russia.

Former Foreign Minister Sigmar Gabriel attracted scrutiny for his address at the 25th anniversary of the Russian-German Forum, an NGO which promotes bilateral relations between the countries. The German tabloid Bild claimed that the former cabinet minister was dancing to Moscow’s tune, lambasting him for both participating and his opinions on different topics concerning Russia’s foreign policy. The publication reproached the politician for what he claimed to be his "balanced German attitude."

The tabloid saw a pro-Russian bias in Gabriel’s support for the Nord Stream 2 project, as the politician advocated German participation in it. He had stated that Berlin shouldn’t give up on Russian gas, and remain independent from the US position.

Bild also attacked his position on Russia’s role in the Syrian peace process, as Gabriel sees Moscow as a key player in ending the violence there. The newspaper claimed that his stance was too pro-Kremlin, and attacked his assertion that the talks in Astana and Sochi were a step towards realizing the Geneva agreements. According to Bild, the UN-led peace talks in Switzerland were undermined from the very beginning in 2012 by Russia, as Moscow supported Syrian president Bashar Assad, whom they call a dictator.

When speaking about the Skripal case, Gabriel called for a thorough investigation of the alleged attempt to murder the former spy, with the help of international organizations. He asserted that evidence should be used to prove guilt in the case, and that Russia should be given the benefit of the doubt. He also warned against “the growing hysteria around the discussion and unfolding spiral of mutual suspicions and most bizarre versions.”

Although Bild admitted that this position looks convincing at first sight, it claimed that in this case, calls for conclusive evidence should be seen as  “old Kremlin tactics of playing out with time.” The tabloid also insisted that Russia was guilty, stating that there were 25 reasons why Moscow had a motive, without elaborating on them.

Trying to “unmask” Gabriel as a Kremlin advocate, the journalist claimed that the former cabinet minister, “no beginner in politics,” voiced several words of criticism to veil his pro-Russian propaganda,  saying immediately that Russian position differs.

Sigmar Gabriel, a prominent member of the Social Democratic Party of Germany (SPD) was Germany’s foreign minister under Angela Merkel  from January 2017 until March 2018, when a new grand coalition cabinet started its term. After Gabriel left the position, he remained in the federal legislator.

He began his term by stating that he is interested in a friendly, intense partnership with Russia. In 2017 he backed Nord Stream 2 and criticized Washington's targeting of European –Russian gas projects with a new package of anti-Russian sanctions, calling it "not right." He pointed out then that decades ago, the gas market was liberalized, which allowed European enterprises to determine for themselves whose gas they want to purchase.