Scotland Yard has come under fire for the politically-driven reduction of its stop-and-search operations which has undermined law enforcement efforts to prevent the knife attacks plaguing London in recent years.

For the first time in history, the murder rate in the British capital has overtaken that of the Big Apple, marking a deterioration of the security environment in London.

According to the latest figures, some 23 people were killed in London over the past month in comparison to 21 violent deaths in New York.

READ MORE: EXCLUSIVE: Ex-Police Chief on Why Cuts Mean Theresa May Has 'Blood on Her Hands'

The two cities have comparable populations and police forces, yet almost opposite approaches to law enforcement.

In the early 1990s, the New York Police Department (NYPD) rolled out its zero-tolerance approach to crime, deploying a significant number of police officers and conducting numerous preventative actions in high-crime areas to stomp out lawlessness, thereby improving the overall security environment in the city. 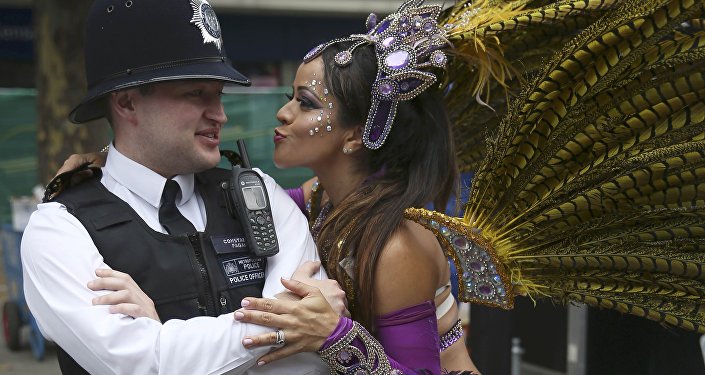 © REUTERS / Neil Hall
No More Notting Hill? Rise in 'Never Again' Calls After Carnival Stabbings
In contrast, London's Metropolitan Police Service (MPS) has been gradually scaling back its pre-emptive measures, specifically stop-and-search ops, due to accusations of political incorrectness, as the operations allegedly discriminated against ethnic minorities, who were targeted by police officers more frequently.

However, these politically-driven restrictions on law enforcement as well as crippling cuts to police forces across the UK had a drastic effect on security in London, as the murder rate has grown by some 38 percent since 2014.

In comparison, the murder rate in New York has fallen by 87 percent, following the introduction of the zero-tolerance policy in the 1990s.

In an effort to reverse the dangerous trend, Metropolitan Police Commissioner Cressida Dick announced that the capital's police force will increase "intelligence-led" stop-and-search.

"We will be out on the streets more — stop and search is likely to go on going up," she said, according to the Daily Express.

So far in 2018, the MPS has registered 46 cases of violent deaths in the British capital.