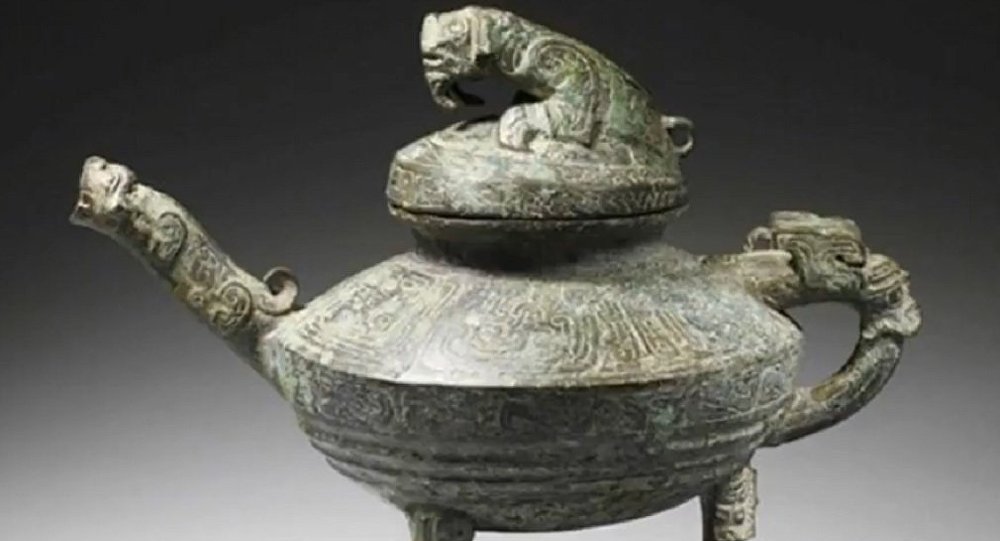 An extremely rare Chinese bronze vessel that was plundered from the Old Summer Palace, or Yuanmingyuan, by a British officer in 1860 during the Second Opium War (1856-60) has been scheduled for sale at the Canterbury Auction Galleries in Kent, a southeast town in the UK on April 11.

The vessel was recently rediscovered by Alastair Gibson, a British art dealer, along with three other bronzes from the Qing Dynasty (1644-1911) as well as a photo and a letter that connect the bronzes to the sack of Yuanmingyuan by British and French forces in 1860. In the letter dated October 17, 1860, Harry Lewis Evans (1831-83), a Royal Marine Captain during the Second Opium War, explains to his mother how he took the Tiger Ying vessel from Yuanmingyuan.

© AFP 2019 / Daniel Leal-Olivas
Flawless Diamond Dug Up in Angola Sells at Auction for a Record $34 Million
"I succeeded in getting several bronzes and enamel vases as well as some very fine porcelain cups and saucers of the Emperor's imperial pattern but they are so dreadfully brittle that I quite despair ever being able to get them home in their present condition," Evans wrote.

Talking to media, Gibson stated that he never imagined that he would come across such valuable relics when a friend asked him to look at his small private collection. The dealer emphasized that the Tiger Ying was an unparalleled valuable piece since it depicts a tiger, considered to be the king of beasts in Chinese culture.

The vessel has undergone thermo-luminescence tests that show it is between 2,200 and 3,500 years old.

"Although it is said to be looted from Yuanmingyuan, we still have to confirm this," an expert on bronzes who asked to be anonymous in Beijing, told the Global Times.

"Scientific tests can only determine the age of this treasure. Based only on the pictures that we've seen online, it is difficult to say if it actually came from Yuanmingyuan," expert said, emphasizing that "if it is really was looted from Yuanmingyuan, according to the current international convention it should be returned to China."

As news of the auction quickly swept through Chinese social media, many netizens posted differing opinions on Sina Weibo.

"Shame on them for selling something that was looted by their ancestors," commented Dai Ni Zuo Jianzhi. Some netizens tried to look on the brighter side of the sale, thinking of it as a way to ensure the aging bronze is protected. "If there will be someone who takes good care of it, then I think the sale is fine," said Lanjiajia Ershi.

© Photo : C&T Auctioneers and Valuers
Unseen Intimate Photos of Adolf Hitler During the War to be Sold at UK Auction
This is not the first time that relics looted from China have been sold at auction. Famous examples like the Administration Scroll, the painting series Forty Scenes of Yuanmingyuan and the heads of four Chinese zodiac statues that were stolen when the joint British and French army attacked Beijing.

According to historic documents, at least 1.5 million treasures were looted from Yuanmingyuan, with most being scattered overseas. Although UNESCO has launched a convention to prevent the illicit trafficking of the stolen antiquities and provides several ways to ask for restitution of cultural property, getting these treasures back is no easy task for China.

It is not an impossible one, however, as other countries have seen success in the past. The return of the Korean Pukkwan Victory Monument, a stone stele commemorating a series of Korean military victories against invading Japanese forces during the Imjin War (1592-98), in 2005 is a good example.

The monument was stolen from the Korean peninsula during the Russo-Japanese War in 1905 and then stored at the Yasukuni Shrine in Tokyo. There it remained until 2005, when Korean Buddhists asked for its return, a request that put the Japanese government under some pressure.

© AP Photo /
Picasso Painting Stolen by Nazis Fetches $45 Million at New York Auction
Finally, through the joint efforts of the ministers of culture in North and South Korea, the monument was returned to its home in Hamgyong Province in North Korea later that year.

In a statement sent to the Global Times, the State Administration of Cultural Heritage said it was wrong to auction the vessel.

"We hope the authorities related to this event can follow international convention and also consider the feelings of the people in the original country of the treasures," the statement read. "It is not permitted to sell or use it for commercial exploitation."

This article was originally published by Luo Yunzhou in the Global Times.