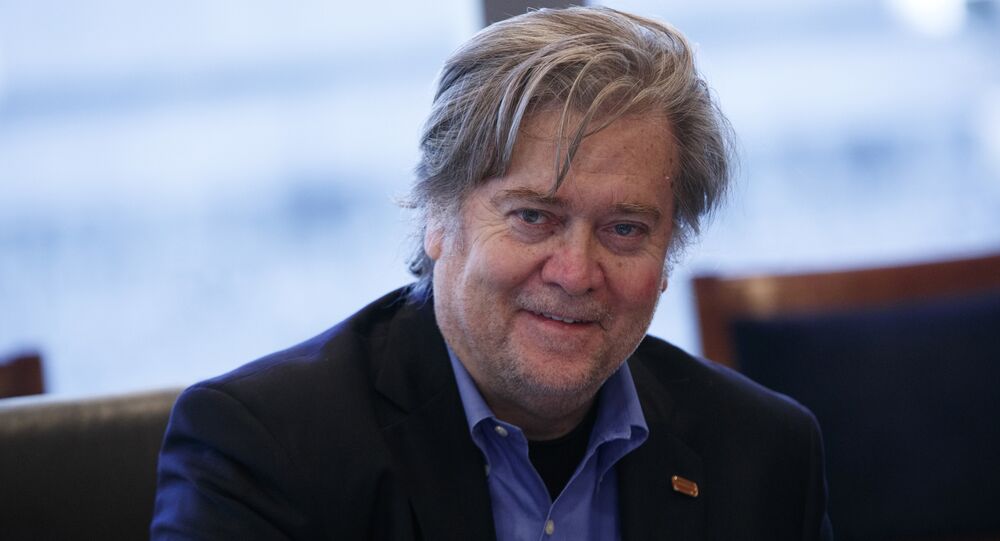 Steve Bannon, who is often hailed and pilloried for being the brainpower behind Donald Trump's rise to power, is headed for Sweden, where right-wing Sweden Democrats, whom he called a "lesson for the whole world" are likely to become his next project, alongside a syndicate of Breitbart-like multi-language platforms.

In addition to presenting his ideas for a syndicate of multi-language Breitbart-inspired portals challenging the established press, Bannon admitted his fascination with the Sweden Democrats (SD), a right-wing anti-immigration party that in matter of a decade propelled itself from obscurity to being the Nordic nation's leading opposition force.

"We've studied the Sweden Democrats for a while. They have come from nowhere, to be a dominant, powerful political party in Sweden. Just as importantly, I think, they have gone from an entity that no respectable person wanted to be associated with, to a party that is really reaching out and getting many people to feel comfortable being associated with them," he said. "And here is the reason: They managed to change their core message without losing their driving force," he added, praising SD leader Jimmie Åkesson as a "dynamic politician."

In Scandinavia, the Sweden Democrats are often labeled as "Nazis" due to the party's origin in the far-right, despite the fact that it has long since switched its identity to match a more palatable brand of nationalism resonating with a broader public.

"Anti-Semitism and what the Nazis stood for, ethno-nationalism, has absolutely no place in the modern world and modern political life. I think what you're seeing in the rejection of these establishment politicians is people wanting their country back and their culture back. It transcends ethno-nationalism," Bannon pointed out.

Bannon admitted to being labeled a "blood-and-soil nationalist" by the "old traditional conservatives," whom he claimed to "vilify" him more than "the guys of the left." Therefore, his message to the Sweden Democrats and their likes was: "just stick to what you think is right. And keep grinding. Like Trump. Once you start connecting with people they will all want to be your friend."

In an interview with the conservative British magazine The Spectator, Bannon confessed to his "fascination" with Mussolini. In The New York Times, he called Hungary's nationalist Prime Minister Viktor Orbán a "hero". "Let them call you racists. Let them call you xenophobes. Let them call you nativists. Wear it as a badge of honor," Bannon told Marine Le Pen's fans in France.

Former White House chief strategist Steve Bannon speaking to the crowd attending the party congress for France's far-right National Front party: "Let them call you racist. Let them call you xenophobes… wear it as a badge of honor." https://t.co/veWU4gawYf pic.twitter.com/KnovkuDZXJ

​Now, he aims to bring across the same message to Sweden.

"You couldn't get nicer, more accommodating people than the Swedes. Swedes are giving, caring people who reach out to help in situations around the world. Even when this migration thing started. You know in your hearts that you're not racist or nativist. But you have seen what has happened to your country. Because the people in Brussels don't care. That's what I meant in France. Like Trump — giving everything that Trump has done to help the black and Hispanic working class, the lowest unemployment among blacks. And they still call him racist," Bannon said.

By his own admission, Bannon will be spending "at least a week each month" in Sweden this summer. Bannon said that Swedes are "at the frontline of what's going on," adding that his focus currently is on "building an army of grassroots" in the US.

The Sweden Democrats, however, refused to corroborate the future collaboration, denying having received any requests from Bannon, the tabloid daily Expressen reported.

Stephen Bannon is a media executive, political figure, former investment banker, and the co-founder and former executive chairman of Breitbart News. He served as White House Chief Strategist in the administration of Donald Trump during the first seven months of Trump's term.