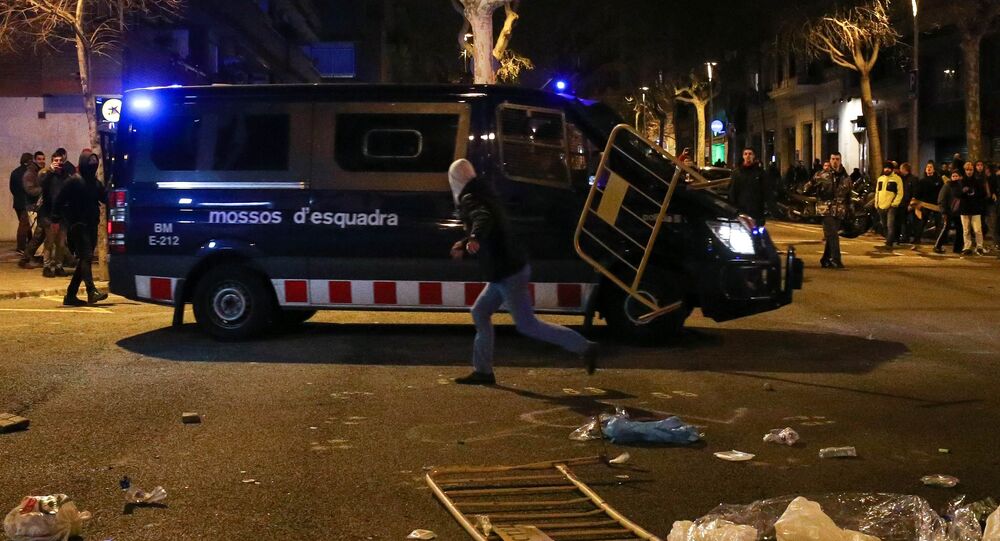 The protests followed the Sunday's Puigdemont's detention on a European arrest warrant in Germany on his way to Belgium, as he was wanted in Spain for sedition and rebellion.

He is expected to appear in a German court later on Monday. Puigdemont's arrest sparked protests across Catalonia, with about 50,000 people taking to the streets to show their support for the Catalan ex-leader.

According to Europa Press agency, five of the detained people were released Sunday night and are waiting to appear before the court, while the other four will face trial later on Monday.

Earlier in the day, the Catalan medical services reported that around 100 people had sought medical care in Barcelona, including 23 law enforcement officials. As many as seven other people were injured in the city of Lleida and one person in Tarragona.

The protests were initiated by the public organizations the Catalan National Assembly and Omnium Cultural, which called for protest actions near the Spanish government's offices in Catalonia.

READ MORE: Puigdemont Ready for Talks With Madrid Regarding His Return to Spain

On October 1, Catalonia held an independence referendum, during which the vast majority of voters backed the region's secession from Spain. The plebiscite was not recognized by Madrid, which subsequently imposed direct rule over the autonomous region and dismissed its government. Several ministers of the former Catalan government were arrested, while several others managed to leave Spain. Puigdemont has resided in Belgium since fleeing Spain in October.