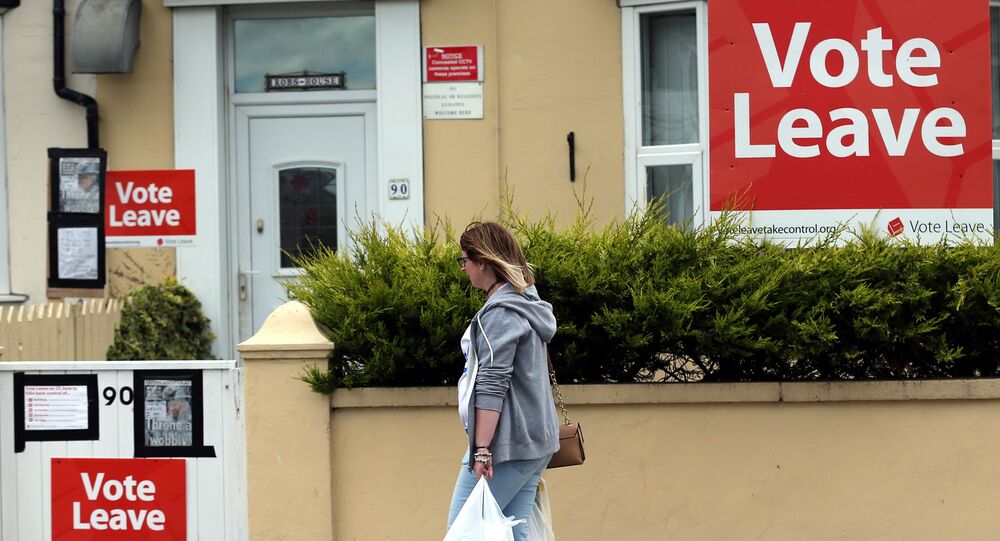 Shahmir Sanni, who used to work for the Vote Leave team, said that the official Brexit campaign had exceeded the legal spending limit, having thus broken the law.

In an interview with the Observer, the whistleblower claimed that Vote Leave had donated some 625,000 pounds ($881,540) to the founder of a different group, BeLeave, Darren Grimes, before the June referendum. Furthermore, Sanni alleged that the funds went to Canadian data firm Aggregate IQ, which has been linked to Cambridge Analytica, the leading data mining firm that used Facebook data to develop a mechanism that would allow it to predict and influence voter behavior.

While Vote Leave chief Dominic Cummings, as well as Grimes, has denied the allegations, saying that he had checked it with the Electoral Commission before donating money to the group, Sanni has insisted that the official Brexit campaign violated referendum rules.

© REUTERS / Neil Hall
Founder of Pro-Brexit Campaigning Group Denies Working With Cambridge Analytica
It appears that British electoral law forbids the coordination between different campaign groups, which must comply with spending limits, and if they decide to work together, they need to have a shared spending limit. Separate campaign organizations could spend up to 700,000 pounds ($989,597), provided they registered as permitted participants.

Sanni claimed that everything passed through Vote Leave manager Stephen Parkinson, who turned out be the whistleblower’s ex-boyfriend.

“We’re going on a path of Brexit based on lies, based on cheating, based on essentially a scam”. Brexit insider accuses Vote Leave of cheating- in response the PM’s political secretary denies the claims and “outs” the accuser as gay #TheBrexitWhistleblower https://t.co/NWMQSmmJZF pic.twitter.com/RQv357KgHP

Parkinson issued a “personal statement” to Channel 4 News, where he denied the allegation, saying that he was “saddened” by the “factually incorrect and misleading” claims from Sunni, who previously blamed Parkinson for outing him as gay and forcing to tell his family in Pakistan the truth about his sexual orientation, which could put them in danger.

“The idea… that the campaign was legitimate is false.” A Brexit insider accuses Vote Leave of cheating — in response the PM’s political secretary denies the claims and “outs” the accuser as gay. #TheBrexitWhistleblower https://t.co/NWMQSmElof pic.twitter.com/uM8koUk7Ta

Sanni said that he had reported the overspending allegation to the Electoral Commission on March 22.

"In effect they used BeLeave to overspend, and not just by a small amount… Almost two thirds of a million pounds makes all the difference and it wasn't legal. They say that it wasn't coordinated, but it was. And so the idea that the campaign was legitimate is false," he added.

The Electoral Commission has refused to comment on “live investigations,” having only mentioned that it had a “number of investigations open in relations to campaigners at the EU referendum.”