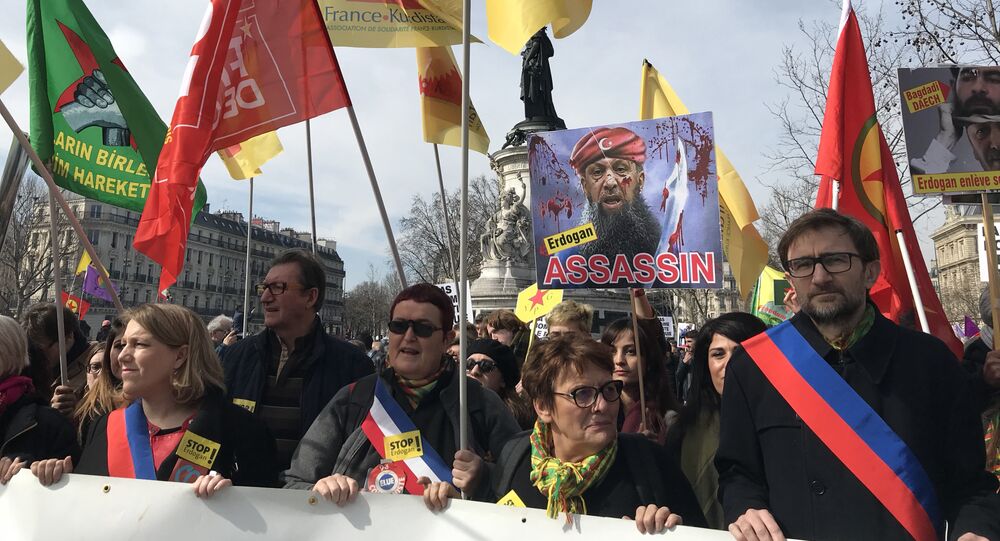 PARIS (Sputnik) - A mass rally in support of Kurds amid Ankara’s military campaign in Syria’s Kurdish-dominated district of Afrin took place in Paris on Saturday, a Sputnik correspondent reported.

"I am Afrin," "Political Solution for Kurdistan," the banners read as people were marching along the streets under the accompaniment of folk music.

Earlier in the day, the General Staff of the Turkish Armed Forces announced that Ankara had established full control over Afrin. Turkish President Recep Tayyip Erdogan, however, has said on multiple occasions that the Turkish operation in northern Syria will not end with the seizure of Afrin and will focus on the regions of Manbij and Idlib moving forward.

TWEET: ​#SputnikPhotos Dozens of demonstrators went to the North station in #Paris to show their support to the Kurdish population of #Afrin

On January 20, Ankara, jointly with the opposition Free Syrian Army forces, launched Operation Olive Branch in Afrin in order to "clear" Turkey's Syrian border from the terrorist threat. Turkey considers the Democratic Union Party (PYD), a Kurdish political party in northern Syria, and the Kurdish People's Protection Units (YPG) militia to be linked to the Kurdistan Workers' Party (PKK), listed as a terrorist organization by Ankara.

A total of 3,731 Kurdish and Daesh militants have reportedly been killed or captured since the start of the military campaign.