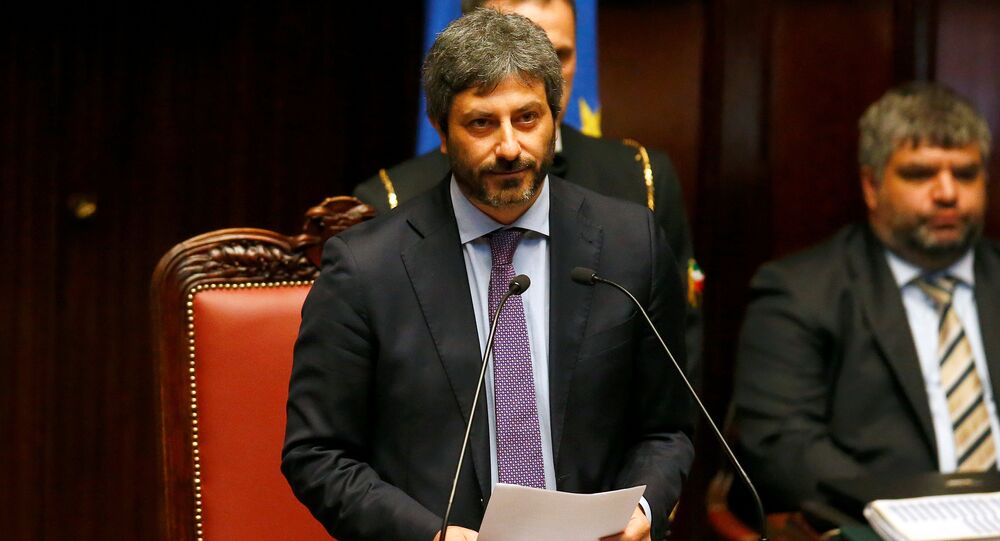 Earlier in the day, Maria Elisabetta Alberti Casellati from Forza Italia was elected president of the Senate, the upper chamber of the Italian parliament.

Fico obtained victory in the fourth round of the vote. According to the latest data, he managed to gain the support of 450 lawmakers in the 630-seat lower house of the parliament.

​TWEET: President @Roberto_Fico: "Only by rediscovering the spirit of being a community of citizens can we recover the sense of state that we want to embody, in which no one should feel marginalized anymore and everyone can realize their potential. Best wishes for your work" #OpenCamera

Fico was born in Naples in 1974. In 2013, the politician was elected to the Chamber of Deputies. He is considered to be one of the Five Star Movement's leaders, representing the party's left wing.

© AP Photo / Antonio Calanni
Italy's Lega Party Leader: Do You Really Fear Russia Will Conquer You?
The first meeting of the newly elected Italian parliament opened a day before but both houses failed to appoint their presidents on Friday due to intense debates supposedly caused by the fact that no political party had managed to obtain an absolute majority during the March 4 general election.

During the March general election, the center-right coalition, consisting of anti-immigrant Eurosceptic Lega (formerly Lega Nord) led by Matteo Salvini, Forza Italia headed by Berlusconi, Brothers of Italy and Us with Italy, won around 37 percent of the vote, while the anti-establishment Five Star Movement (M5S) received around 32 percent. The ruling Democratic Party (PD) won only 19 percent of the vote.

Intense negotiations on the formation of a coalition government are ongoing.