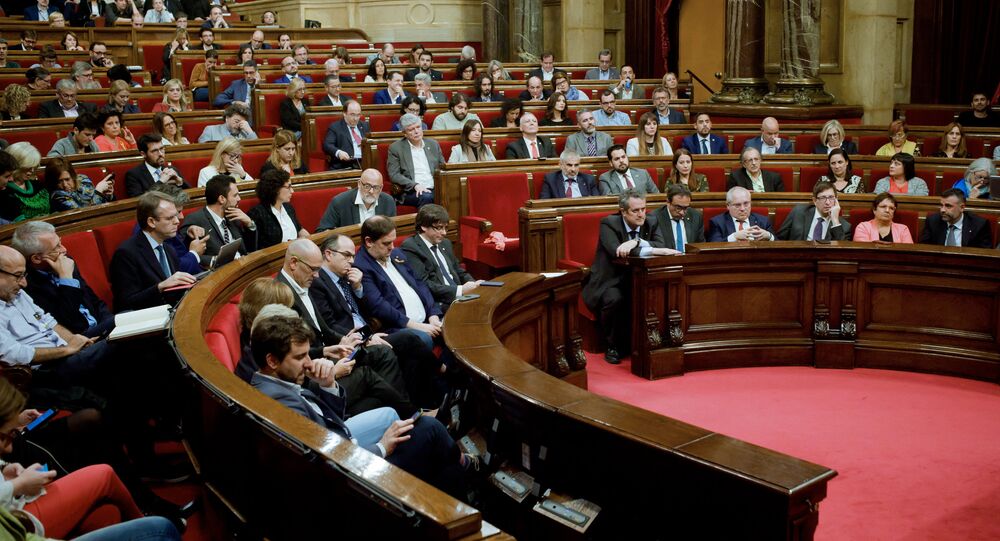 MADRID (Sputnik) - The second round of a vote on Jordi Turull’s candidacy for head of the Catalan government has been canceled since the candidate is detained and cannot show up in the parliament in person, speaker of the Catalan parliament Roger Torrent said.

"That is an abnormal situation. Turull was supposed to be here, there should have been no external interference. The candidate for the post of head of the Generalitat is in jail together with other lawmakers … The [parliamentary] session has been canceled," speaker of the Catalan parliament Roger Torrent said at the session's opening.

Earlier, representatives of the parties standing for Spain’s territorial integrity also demanded to cancel the vote.

The session, however, is ongoing, with lawmakers sharing their views on the latest developments in Catalonia.

On March 22, Jordi Turull fell short of the required votes to be elected as regional president. The second round of voting was to be held two days later, with a simple majority required for the electoral process.

© AP Photo / Paul White
Jailed Catalan Politician Sanchez Refuses to Run for Government Head
On March 23, the Spanish Supreme Court charged 25 Catalan officials with various offenses linked to last October’s independence vote, while 13 of them were accused of rebellion. Among those whom court ruled to arrest as a preliminary measure pending trial was Turull. He, along with five other politicians who appeared in court, is expected to be kept in custody without bail until trial. The court also activated a European arrest warrant for former Catalan head Carles Puigdemont and several others. The ruling has already provoked protests across Catalonia.

On October 1, Catalonia held an independence referendum, which the central authorities did not recognize. After the regional parliament unilaterally announced independence later in October, based on the results of the vote, Madrid imposed the direct rule over the autonomous region and dissolved the Catalan parliament. Several pro-independence leaders were jailed, while Puigdemont fled to Belgium to avoid an arrest.