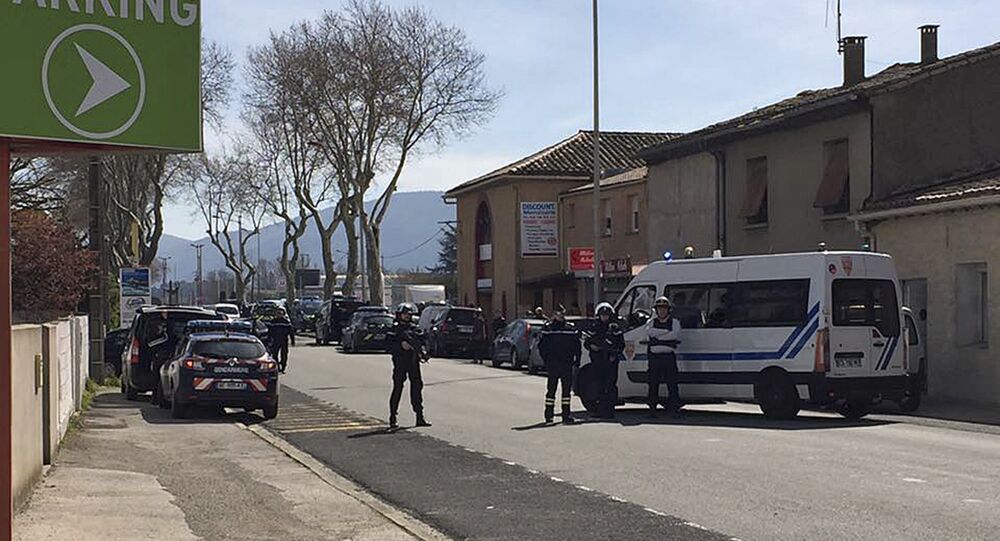 What We Know So Far About French Hostage Taker, Self-Proclaimed Daesh 'Soldier'

The unidentified attacker shot several people in a supermarket in the Southern French town of Trebes and taken several others hostage. He demanded the release of the Paris November 2015 attacker.

The unidentified assailant allegedly of Moroccan origin first fired shots at police officers near the city of Carcassonne in the morning. One of the officers suffered a shoulder injury, but his life is out of danger. According to French police union official, he killed one man by shooting him in the head in the same city.

The shooter later went to a Super U supermarket in the town of Trebes using a car. There he killed one person and severely injured another, who is in life-threatening condition, according to Yves Lefebvre, secretary general of the SGP Police-FO police union.

According to AP citing a security source, the attacker has been identified as a 26-year-old Moroccan and was flagged for being a potential extremist. The car he used to arrive to the supermarket was in the General Directorate for Internal Security (DGSI) database, reports the local LCI TV channel. According to BFM, the attacker claimed to be a "Daesh* soldier". The terrorist group later issued a confirmation saying that the attacker was a "soldier of the caliphate."

Local media report that a man was armed with double-edged weapons and firearms and allegedly shouted "Allah Akbar."

What Is the Current Situation in Trebes?

According to BFM TV, the mother and sister of the gunman have arrived at the supermarket, where he continues to hold hostages.

Media report police have launched a raid on the attacker's positions and shot him down. French Interior Minister Gerard Collomb confirmed this information.

French police report that so far three people have been killed as a result of the shooting and hostage taking incident, about a dozen have been injured. The Interior Ministry has confirmed the information of three dead. The interior minister confirmed he was under supervision, as he was known to the police. He added that he acted alone and used to be a petty drug dealer. The attack is considered a terrorist attack by French officials.

*Daesh (also known as ISIS/ISIL/IS) is a terrorist organization banned in Russia.