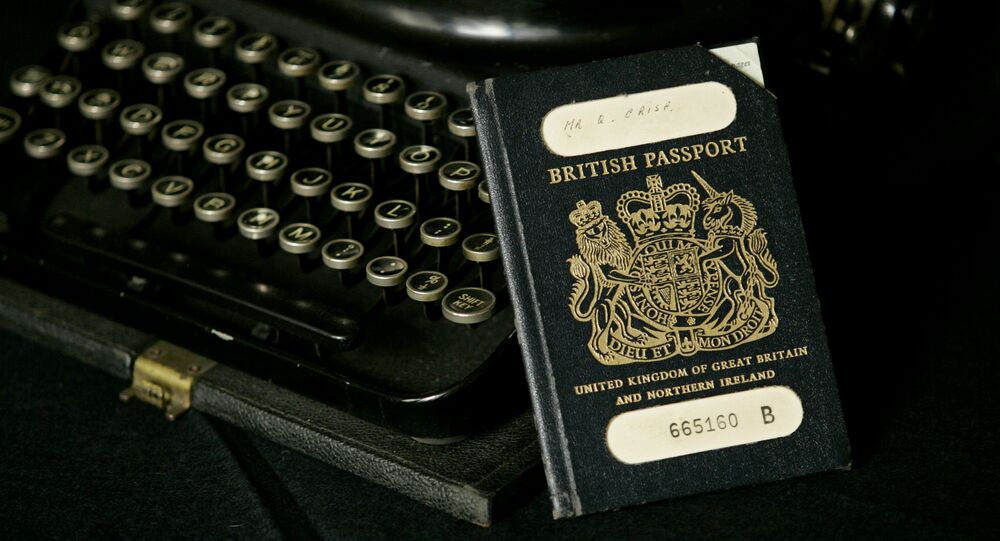 In late 2017, the UK government announced that it would be switching back to the iconic blue passport in 2019, with Prime Minister Theresa May describing it as an “expression of our independence and sovereignty.”

It has now emerged that the contract for the manufacturing of the UK’s blue passports is likely to be awarded to Franco-Dutch security company, Gemalto.

© AP Photo / Matt Dunham
Black or Blue? Twitterians Struggle to Decide What Color Original UK Passport Was (PHOTOS)
The company reportedly undercut its closest rival by some £50 million (around US$70.72 million at the current USD/GBP exchange rate.) The total value of the contract is estimated to be worth around US$700 million.

It was previously reported that the passports could be manufactured in Germany or France, as companies from these countries were shortlisted as likely candidates for the contract.

Pro-Brexit politicians strongly criticized the decision to produce the passports outside of the UK, with Conservative MP Sir Bill Cash describing it as “completely wrong.”

“I think it is incongruous to say the least. It is completely unnecessary and it is symbolically completely wrong. Whatever the conditions which led to the decision in terms of pricing, the fact is that this is a symbolic event,” Sir Cash said.

READ MORE: The UK Could Have Had Any Passport Color It Wanted and Stay in the EU – Official

Meanwhile, Tory MP Priti Patel branded the move a “national humiliation” and urged the government to attempt to reverse the decision.

“This should be a moment that we should be celebrating. The return of our iconic blue passport will re-establish the British identity. But to be putting the job in the hands of the French is simply astonishing. It is a national humiliation. I would urge Amber Rudd [UK home secretary] and the government to look again at the powers they have to see what they can do,” Priti Patel told British media.

The prospect of the UK’s passports being manufactured outside of Britain has caused a stir on social media, with renowned UK businessman Duncan Bannatyne describing it as “madness,” while others mocked the hype surrounding the return of the blue passport.

FURIOUS? some of us are so bloody mad we could explode Our government is stupid. STUPID. https://t.co/utmY8zkMjk

After all that global Britain free trade stuff, is anyone really annoyed British passports will be produced in France? Should the govt protect British passport manufacturers?

France would totally ignore EU procurement rules if it meant their new passport had to be made in Britain. We should do same

The UK voted to leave the EU via a referendum in mid-2016, with just over half of voters voting in favor of such an exit. The recently announced Brexit transition deal shows considerable progress in negotiations, but a number of matters, such as the Irish border, are yet to be entirely resolved.

Black or Blue? Twitterians Struggle to Decide What Color UK Passport Was