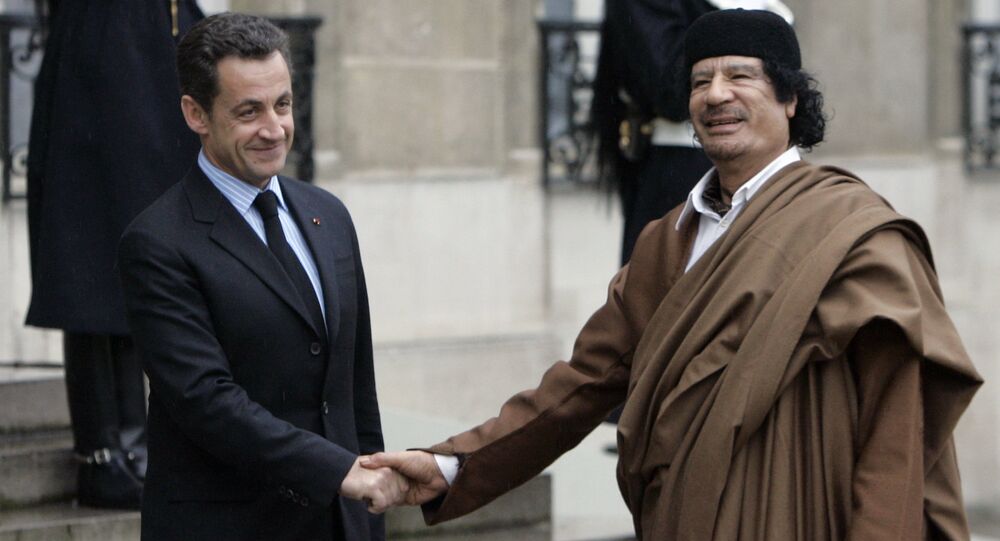 The first runner-up in the 2017 presidential elections voiced tough demands for the investigation into the former French head of state, who is suspected of taking money from the Libyan government for his campaign.

The leader of France's populist National Front, Marine Le Pen, responded on Twitter to the probe against Nikolas Sarkozy, who allegedly took money from Libya’s longtime leader Muammar Gaddafi for his 2007 election campaign.

“Justice should wade through seriously.  The case is not only about electoral campaign financing, it also concerns the war, elimination of the country, destabilizing of the state, followed by a mass migration wave,” Le Pen tweeted.

The politician, who ran for president in 2012 in 2017 but came in third and then second place, condemned the joint military operation by the NATO and the EU in Libya during her first campaign and demanded that France should leave the alliance.

France’s ex-president Nicolas Sarkozy, who was detained in Nantre two days ago, remains under judicial supervision, according to the reports of the French news outlet Le Monde. He is charged with "passive bribery, illegal election campaign financing and the concealment of Libyan public funds." He reportedly took about 50 million euro from the former Libyan leader Muammar Gaddafi ahead of the 2007 presidential elections. However, Nicolas Sarkozy denied the charges brought against him, according to reports. Most recently, the former French president denounced the lack of "physical evidence" in his case, as cited by local media.

"I've been living the hell of this slander since March 11, 2011, when Gaddafi first made the allegations," Sarkozy reportedly told judges in remarks published by the Figaro.

In 2011 Gaddafi ‘s son publicly claimed the French president should admit he took money from the Libyan government.  A criminal case was opened in 2012, but the investigation had been suspended until 2017, when the judge brought preliminary charges against the former president, stating that prosecutors had enough evidence to start the criminal process.

It’s not the first time he has faced charges of illegal campaign financing. Earlier, French police investigated allegations that billionaire Liliane Bettencourt, a principal shareholder of L'Oréal, made illegal payments. Later, the charges were dropped.

During his reign, Sarkozy supported the Western military campaign in Libya despite his prior cozy relationship with the country’s controversial leader. Gaddafi was captured and killed during the war in October 2011 after a French missile struck his vehicle and rule of the country is contested by rival factions.