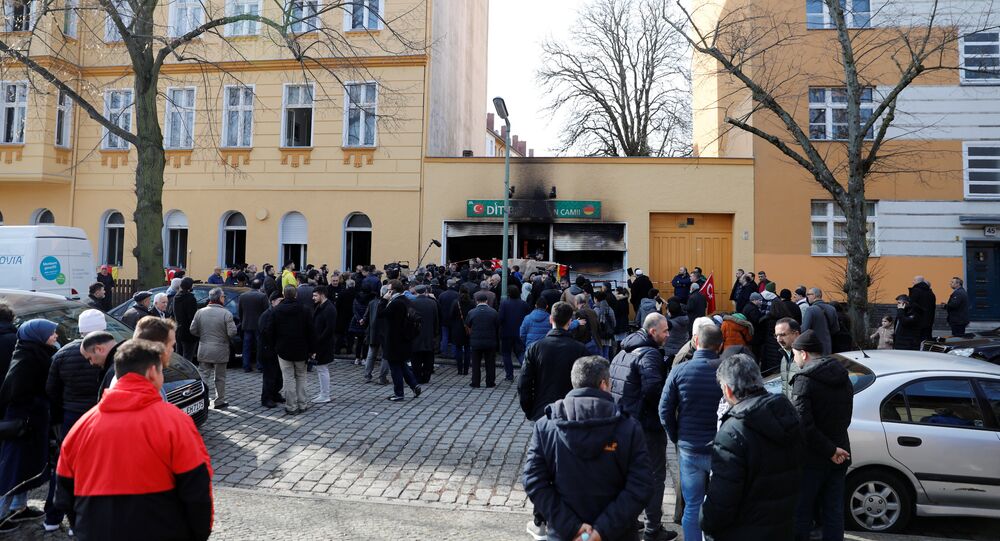 Germany Is 'Mirror for Turkish-Kurdish Conflicts'-Interior Min. on More Attacks

The federal Interior Ministry has reportedly registered three times more attacks against the Turkish community so far in 2018 than it did in all of 2017.

This year 37 attacks, including arson and vandalism have been directed at Turkish mosques, cafes and community organization in many German cities, including Berlin, Frankfurt, Hamburg and Aachen, according to Germany’s Interior Ministry, according to outlets of the Funke media group. This marks a significant rise of violence against one of the biggest national minority groups in Germany after Ankara began its operation against the mostly-Kurdish region of Afrin in Syria. According to the 2017 stats, which exclude assaults allegedly committed by right extremists, there were only 13 such attacks throughout last year.

The ministry spokeswoman admitted it’s not a surprise that the unfolding of the Turkish-Kurdish conflict in Syria has impacted the peace between the national minorities in Germany.

"Germany has long been a mirror and sounding board for Turkish-Kurdish conflicts, in light of the large number of people with Turkish backgrounds living here… This is especially true considering the backdrop of current events in and around Afrin," she said to the media.

However she pointed out that these are preliminary numbers, which can eventually change.

Amid the reports about the rising violence, Turkey’s Ambassador Ali Kemal Aydin expressed concern and called on German authorities to ensure the security of the community mosques and establishments, while bringing the attackers to justice.

“It is with astonishment and concern that we are witnessing the silence of those who have long talked about democracy, the rule of law and human rights,” he said during a meeting in the Embassy.

Earlier the Turkish-Islamic group in Germany, named DITIB, urged the authorities to take action. They accused the politicians as well as citizens of silence about discrimination and attacks. They stated more than 20 Turkish mosques have become the targets of brutal attacks.

READ MORE: Attacks on Mosques in Germany: Has Turkey's Op in Syria 'Become the Last Straw'?

Along with numerous pro-Kurdish rallies against Turkey’s operation in Syria, some of which turned into clashes, calls for violence against Turkish institutions have been heard. A Kurdish leftist youth group promised to turn the European streets into "rubble and ash".

About 3 million people of Turkish origin (both citizens and asylum seekers) live in Germany now; nearly a third of them are ethnic Kurds.

On January 20, Turkey, supported by the Free Syrian Army militia, started a military operation in Syrian’s Afrin region, populated mainly by Kurds, which they took on Sunday. Ankara stated its goal is to help civilians oppressed by terrorists.