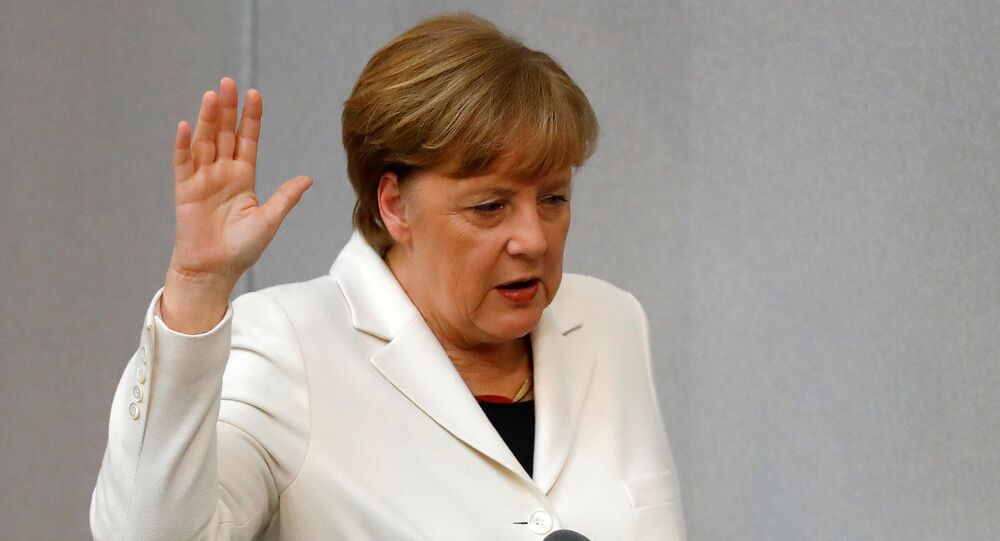 WARSAW (Sputnik) – Russia must prove that it has nothing with poisoning of ex-spy Sergei Skripal and his daughter in the UK city of Salisbury, German Chancellor Angela Merkel said.

Skripal and his daughter Yulia were found unconscious earlier in March on a bench at a shopping center in Salisbury, England. Both of them remain in a critical condition and are being treated for exposure to a chemical. The incident has already resulted in a diplomatic crisis in the Russian-UK relations.

“We believe that there is strong evidence that Russia is involved in that [incident] and now Russia must prove that this is not true,” Merkel said on Monday after talks with Polish Prime Minister Mateusz Morawiecki.

Morawiecki said that Poland was backing a strong EU response to the poisoning incident.

© REUTERS / Parliament TV
'Trying to Make Herself Look Good': Expert Explains UK May's Stance on Skripal Case
UK Prime Minister Theresa May said that it was "highly likely" that Russia was responsible for the Salisbury incident and later went on to announce a package of anti-Russia measures, including the expulsion of Russian diplomats from the country, and the suspension of bilateral contacts between London and Moscow.

The Russian Foreign Ministry refuted all the allegations and requested the UK Foreign Office to allow a joint investigation into the case. On Saturday, Russia announced retaliatory measures against the United Kingdom, declaring 23 employees of the UK Embassy in Moscow personae non gratae in response to London's move.

On Monday, the EU Foreign Affairs Council issued a statement saying it "takes extremely seriously" the United Kingdom's position on Russia's involvement in the Salisbury poisoning.