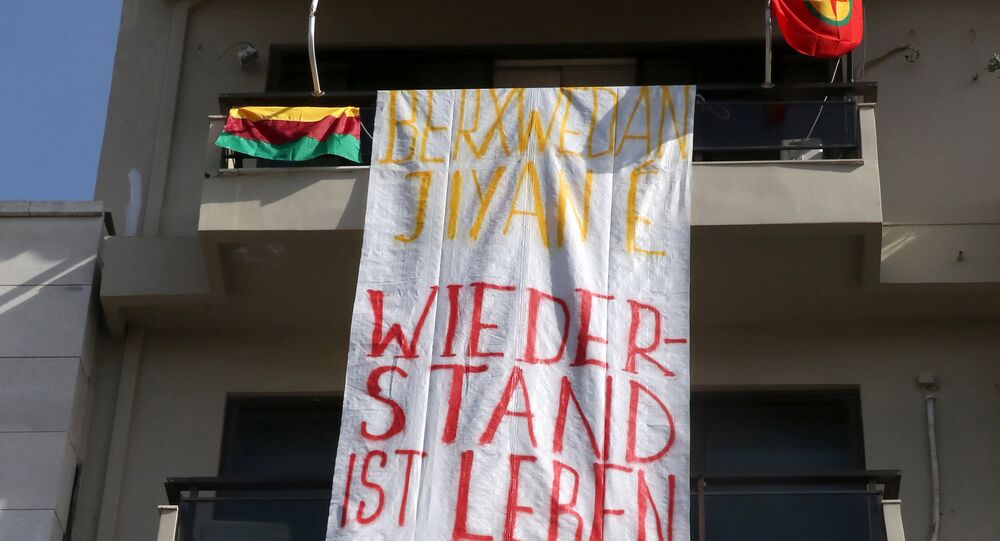 Turkey’s military operation in Syria’s Kurd-dominated city of Afrin has triggered a series of protests by Kurdish migrants and their sympathizers across Europe.

Around a dozen masked men briefly occupied the German consulate on the Mediterranean island’s capital of Heraklion on Friday protesting against Turkey’s ongoing military operation in the Kurdish-held enclave of Afrin in northern Syria, Deutsche Welle reported.

The attackers hung a banner from the building’s balcony with the words “Solidarity with Afrin — Resistance is life" written in Kurdish, German and Greek before leaving the compound shortly after.

© REUTERS / Khalil Ashawi
Thousands of Syrians Leave Afrin for Gov't-Controlled Areas Amid Turkish Advance
Police arrived at the site but there were no reports of any arrests or injuries.

It was not immediately clear why the protesters chose the German diplomatic mission as the target of their attack.

Greece, which is home to a large number of refugees, most of them from war-torn Syria, sees frequent protests staged by Kurds against the Turkish government whose military offensive in Afrin has forced thousands of its residents to flee the city.

At the same time, police in the German city of Hanover said Saturday that about 15,000 Kurds were expected to march in the city against Turkey's operation.

The demonstration, which comes amid the upcoming Iranian New Year celebrations, known as Nowruz or Newroz in Kurdish, will be held under the motto "Newroz means resistance — the resistance means Afrin."

The march will begin at 9:00 a.m. local time (08:00 GMT) with two processions departing from different locations and meeting in the city's center on Opernplatz square.

In January 2018, the Turkish Army launched a military operation, code-named Operation Olive Branch in Afrin against the Kurdish militia in order to "clear" Turkey's Syrian border of the terrorist threat.

The offensive is against the Kurdish-led Democratic Union Party in Syria (PYD), its armed wing the People’s Protection Units (YPG) and Syrian Democratic Forces (SDF) positions in the area.

Turkey considers the YPG as an ally of the Kurdistan Workers Party (PKK), which has been listed as a terrorist organization by Ankara.