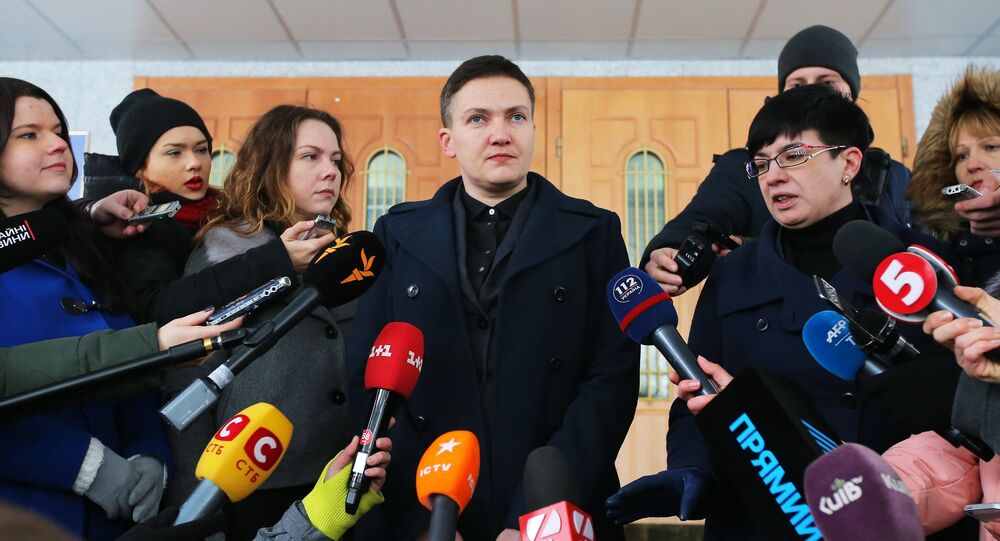 Ukrainian Lawmaker Claims Saw Those, Who Brought Snipers to Euromaidan in 2014

KIEV (Sputnik) - Ukrainian parliament member Nadezhda Savchenko claimed on Thursday that she personally saw the incumbent chairman of the country's parliament, Andriy Parubiy, bringing snipers to Hotel Ukraine in Kiev during the so-called Euromaidan protests in 2014.

"I testified that I had seen a blue minibus arriving at the scene, men with weapons coming out of it… I saw Parubiy leading the snipers to Hotel Ukraine. These people who gave the orders, who committed crimes, that carry the responsibility, will always look for someone to blame," Savchenko told reporters.

She said that the authorities were deliberately blocking the investigation of crimes committed during the fall of ex-President Viktor Yanukovych since many of the officials had been involved in these crimes.

"The shootings on the Maidan, as well as the fact that people are waiting for the investigation for the fifth year, will never investigated… Personally, I testified that [the incumbent Prosecutor General of Ukraine Yuriy] Lutsenko called from the stage [on the Maidan] to bring down the authorities, promised that there would be weapons on the Maidan," Savchenko said.

Savchenko said that the Orange Revolution in 2004 and the Euromaidan in 2013-2014 took place with the support of the Western states.

"Crimes of authorities began long before that… The Orange Revolution and The Revolution of Dignity were not inspired by Russia, but they were supported by the Western civilized world," Savchenko said.

She added that people's lives had not improved since the Euromaidan.

A bit later, however, the lawmaker offered her apologies to Parubiy over the accusations.

On Suggestion to Deprive Her of Parliamentary Immunity

Commenting on the Verkhovna Rada’s decision to dismiss her from the Committee on National Security and Defense as well as the prosecutor general’s suggestion to deprive her of parliamentary immunity, Savchenko said that this was "a crime."

"Step by step, the [Ukrainian] authorities are committing crimes. The first crime is my discharge from the Committee on National Security and Defense. I am a committee member, not its secretary or head, and there is no legal procedure to discharge a member from the committee," Savchenko told reporters.

The lawmaker added that the prosecutor’s proposal to deprive her of parliamentary immunity was also "a crime," since she was absent from the Verkhovna Rada and its regulatory committee when it was submitted.

She also said that every Ukrainian had considered toppling the current government.

"Ukrainians, ask yourselves, which of you has never thought about dismantling this government? Who has never wanted to blast [the president’s office] or Verkhovna Rada… Everyone is talking about it," she said.

Earlier that day, Ukrainian Prosecutor General Yuriy Lutsenko said he intended to arrest Savchenko on charges of preparing a terrorist attack in parliament, claiming that the investigators had "irrefutable evidence." Following Lutsenko's accusations, the parliament voted to discharge Savchenko from the parliament's Committee on National Security and Defense.

"The investigation has irrefutable evidence that Nadezhda Savchenko… personally planned, personally recruited, personally gave instructions on how to conduct a terrorist attack here in this hall, to destroy the government and the official floors with grenades, to bring down the dome of the Verkhovna Rada with mortars and to finish those who survive with machine guns… Therefore, today I, as the Prosecutor General of Ukraine, will ask the parliament to allow bringing its member Savchenko to criminal responsibility, to detain and arrest her," Lutsenko said at a parliament meeting.

In most recent development of the situation, Savchenko was listed as a traitor by a controversial Kiev-based website tracking Ukraine’s "enemies."

Her name was added to Myrotvorets logs, which has routinely published personal details of foreign journalists and eastern Ukrainian rebels, alongside a note saying that she plotted a terror attack and a coup in Ukraine.

© REUTERS / Sergei Karpukhin
Sobchak Fires Back at Ukrainian Foreign Minister Over Crimea Comments
In February 2014, violent clashes between supporters of Ukraine's European integration and law enforcement broke out in central Kiev's Independence Square, or Maidan Nezalezhnosti, claiming the lives of some 100 people. The protests led to a change of government, forcing then-President Viktor Yanukovych to flee the country. Following the power shift, the country plunged into a turbulent crisis aggravated by a military operation in eastern Ukraine launched by Kiev in 2014, after residents of the region refused to recognize the new Ukrainian government.

Last month, the Georgian snipers who participated in the February 2014 unrest said that they had received arms and orders to open fire on people from Serhiy Pashynsky, the current head of the Ukrainian parliament’s National Security and Defense Committee. They claimed Pashynsky and another lawmaker, Volodymyr Parasiuk, personally took part in the mass murders during the protests by firing from their own rifles.