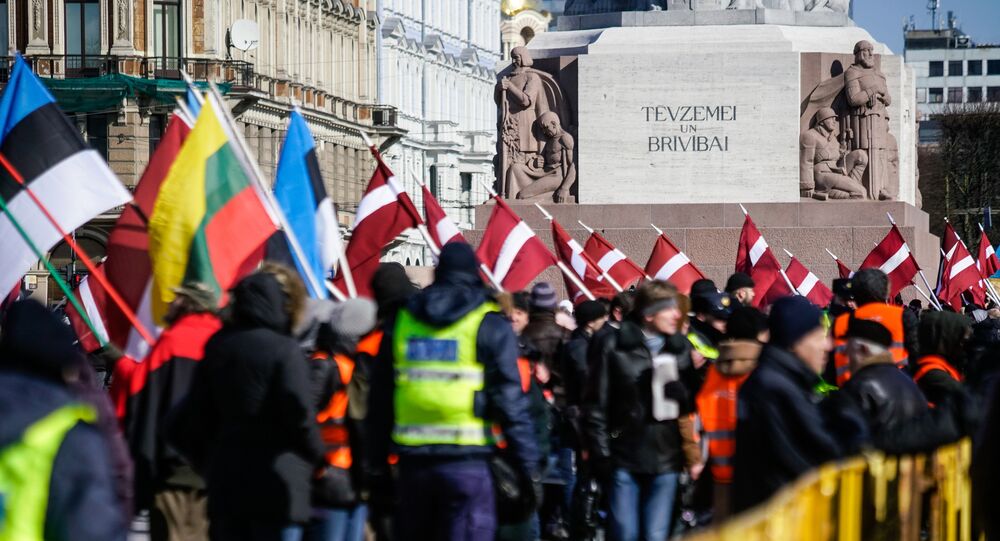 Despite Nazi Germany's Schutzstaffel (SS) paramilitary organization being recognized as a criminal organization during the Nuremberg trials, Latvian SS war veterans and their supporters march annually in Riga, triggering discontent among anti-fascist organizations around the world.

Russia has reacted the annual march of the Latvian Legion of the Waffen SS in Riga, calling it a disgrace.

"We resolutely condemn this shameful event and count on the principal assessments of what is happening in Latvia from the international community and the relevant international organizations," the Russian Foreign Ministry stated.

About 1,500 people took part in a march commemorating deceased members of the Latvian Legion of the Waffen SS in Riga, the city police reported Friday.

"Everything was smooth, but there were several conflicts near the Freedom Monument, two persons were detained," the police said.

Participants of the march gathered near the Dome Cathedral in Riga with the aim to march to the Freedom Monument in Riga. The event was attended by former members of the Latvian Waffen SS (Schutzstaffel) and representatives of the country's Saeima (parliament).

The event went by quite peacefully, with participants holding Latvian flags in their hands. The area around the Freedom Monument was cordoned off by police, and there were obstacles on the square in front of the monument.

A group of anti-fascists with posters condemning Nazism met at the Freedom Monument to protest against the march.

A few dozen people with posters saying "they fought for Adolf Hitler" in Latvian, Russian and English met the procession. Antifascists also shouted the phrase "fascism will not pass" and "shame."

The SS, as well as other Nazi organizations, such as the Gestapo, SD and SA, were recognized as criminal organizations during the Nuremberg trials against major figures in the Nazi leadership and war criminals. Moreover, the creation of concentration camps by the SS was recognized as a crime against humanity.

Despite this, a march of participants of the Latvian Legion of the Waffen SS takes place every year in Riga, resulting in discontent and outrage among anti-fascist organizations around the world.