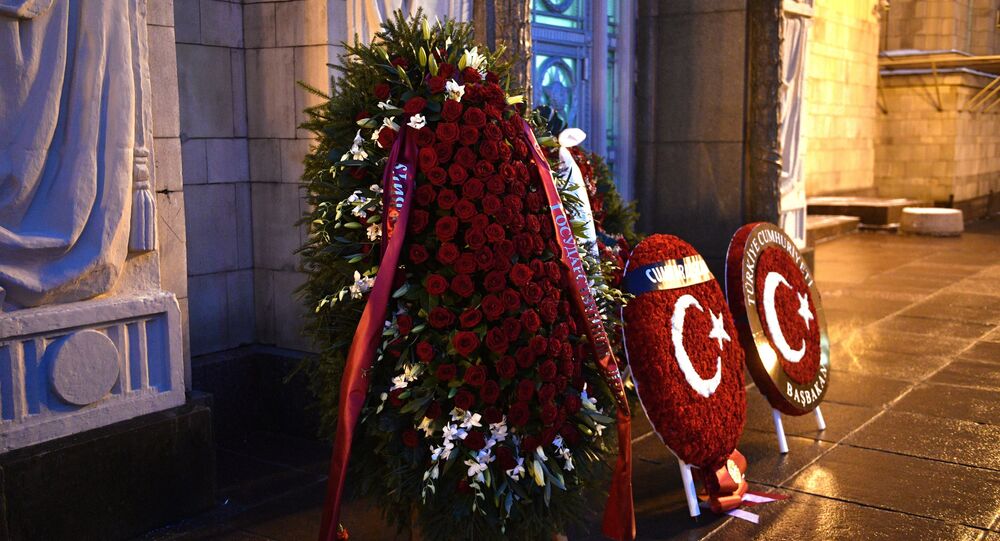 ANKARA (Sputnik) - A memorial week for remembering Russian Ambassador to Turkey Andrey Karlov, who was assassinated in 2016, will take place in the Turkish city of Antalya, Karlov’s charity foundation, which will organize the event, told Sputnik on Wednesday.

"Within the framework of the planned events, the name of the Russian diplomat will be awarded to one of the central streets of the Demre town, located in the province of Antalya. The authorities of Antalya, in turn, plan to announce the handover of a building, located on this street, to the fund. The Memorial Center of Andrei Karlov is set to be established there," the foundation said.

Karlov’s foundation will also cover expenses for the visit of 50 Russian children, who live in a zone with an unfavorable ecological situation, for holidays and treatment in Demre, according to the foundation.

© AP Photo / Burhan Ozbilici
Ankara Renames Art Center Hall After Assassinated Russian Ambassador Karlov
"Within the framework of Andrei Karlov’s days in Antalya, a number of meetings and negotiations of officials and the public are planned, which are designed to promote the progressive development of Russian-Turkish relations. There will be concerts, excursions, designed to familiarize the Russian participants with the culture and traditions of Turkey. In addition, the exhibition 'Andrei Karlov. The Path to Immortality' will be held," the foundation added.

On December 19, 2016, Karlov was shot by an off-duty Turkish police officer, Mevlut Mert Altintas, at the opening of an art gallery exhibition "Russia from Kaliningrad to Kamchatka through the eyes of a traveler" in Ankara. The attacker was killed at the scene by the police. Though the investigation is still ongoing, the Turkish side has repeatedly voiced suspicions that the Gulen movement, considered by Ankara to be a terrorist organization and accused by the authorities of masterminding the 2016 failed coup attempt in Turkey, is linked to the attack.