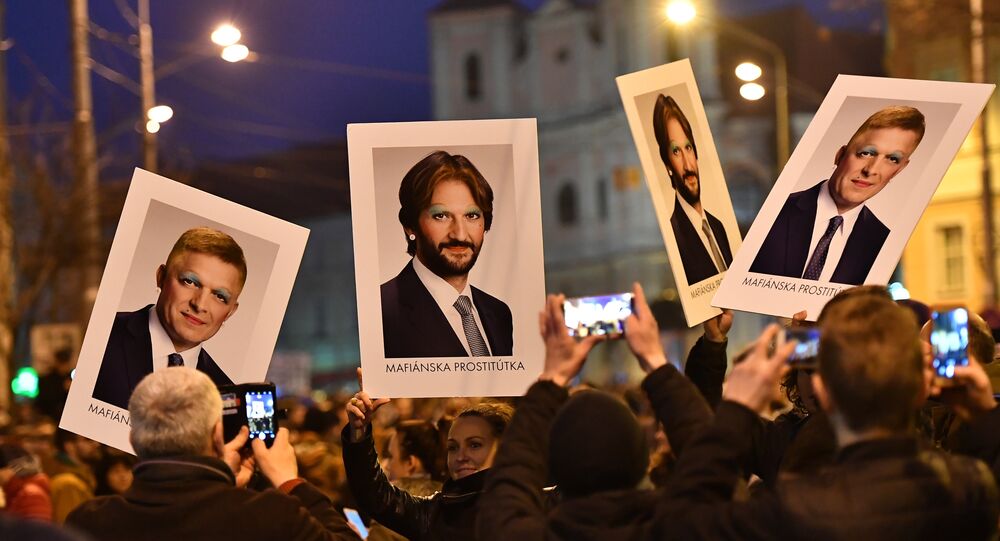 The Central European nation has been swept by massive protests since the murder of journalist Ján Kuciak, who was behind a report unveiling links between Slovakian lawmakers and organized crime groups.

Slovak Deputy Prime Minister and Interior Minister Robert Kalinak resigned on Monday in wake of the mass demonstrations triggered by the killing of Ján Kuciak and his fiancee.

"I think to fulfil my mandate I have to do everything to preserve stability in Slovakia," Kalinak said. "For this reason I have decided to resign as deputy prime minister and interior minister."

The resignation comes after the demands by the Most-Hid (Bridge) group, a junior partner in Prime Minister Robert Fico's government coalition. In recent weeks, Fico has been struggling to keep the government together and prevent the deterioration of the political crisis in the country following the murder of Kuciak.

© AFP 2021 / THIERRY CHARLIER
Slovak PM Stops Short of Accusing President, Opposition of Coup Attempts
The news of the shooting of Kuciak and his fiancee, Martina Kušnírová, who were found dead in their house in late February, has shaken Slovakia, with people taking to the streets of cities across the country in to demonstrate their anger.

About 50,000 people rallied in Bratislava last Friday, calling for the resignation of Prime Minister Robert Fico and his cabinet. The rallies have been described as the biggest demonstrations in the country since the so-called Velvet Revolution in 1989, which marked the resignation of the communist leadership and the disintegration of then-Czechoslovakia.

© AP Photo / Ronald Zak
Demonstrators light with the torches of their smartphones during an anti-government rally in Bratislava, Slovakia, Friday, March 9, 2018. The country-wide protests demand a thorough investigation into the shooting deaths of Jan Kuciak and Martina Kusnirova, whose bodies were found in their home on Feb. 25, and also demand changes in the government.

On March 4, Slovak President Andrej Kiska called for a government reshuffle or early polls in an attempt to restore public trust. He also launched talks with the political opposition to ease the tensions in the country.

Police initially suggested the assassination was "most likely" associated with his investigation into ties between Slovakia's leadership and members of the Italian mafia.