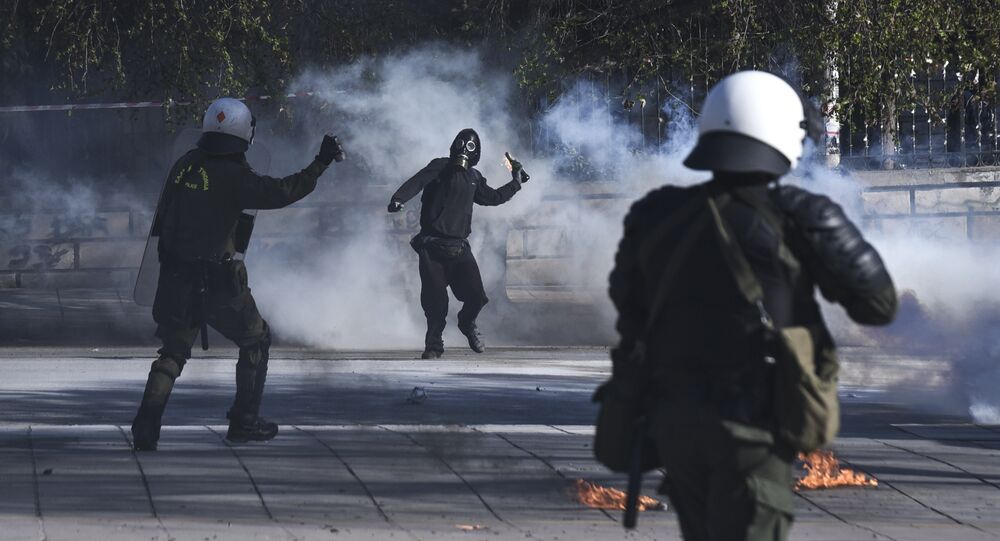 The latest riots in the Greek city of Thessaloniki started in the wake of January protests when right-wing demonstrators burned down anarchists' premises protesting over a decades-long dispute between Greece and Macedonia.

Greek police have resorted to using tear gas and stun grenades against anarchists; about 2,000 demonstrators from across the Balkans took to the streets of Thessaloniki, Greece to protest nationalism.

The anarchists also barricaded themselves inside the University of Thessaloniki, where the law prevents the police from entering.

© REUTERS / Costas Baltas
Protesters Clash With Police in Athens Over Macedonia Name Row (VIDEO, PHOTO)
The anti-nationalist march of anarchists was staged after right-wing activists burned down the anarchists' premises during their January protests against the use of the name Macedonia by Greece’s neighbor, as Greece itself has a region with the same name.

The dispute between Greece and Macedonia over the latter's name emerged after Macedonia gained independence from Yugoslavia in 1991. Greece, which has its own province of Macedonia, argues that its northern neighbor can have territorial claims on the region, once the home of the most famous ancient Greek conqueror, Alexander the Great.

#Greece: 5,000 #antifa participated in the Inter-Balkan Internationalist demonstration in the city of #Thessaloniki against nationalism, fascism, xenophobia, borders and war. In solidarity with #Libertatia and all squats. Clashes broke out at the end of the protest. pic.twitter.com/CVITRFmM1Z

The country, which is recognized as the Former Yugoslav Republic of Macedonia, is simply referred to as Macedonia in the international community, while the Greeks call it by the name of its capital Skopje. Greece is involved in talks with Macedonia, referred to as FYROM by Athens, to resolve the dispute on the name of the country.