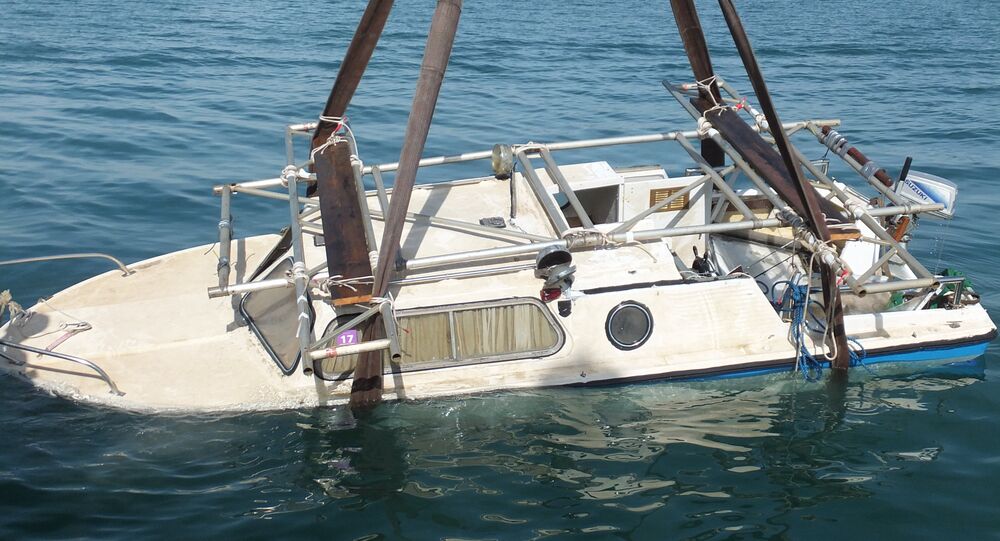 A lookout on a scallop-dredging vessel was distracted by social media on his cellphone moments before a collision which killed three Romanian anglers off the coast of England last year. Thousands of car accidents are also caused by motorists being distracted by their cellphones.

A report by the UK's Marine Accident Investigation Branch (MAIB) said the commercial fishing vessel Vertrouwen did not hit the smaller boat, the James 2, in the English Channel in the early hours of August 6 last year.

But it said they came so close that the larger vessel's wash capsized the boat on which four Romanians had set out on a nighttime fishing trip.

The Romanians were drunk on beer and whisky, according to the report, and were not keeping a proper lookout.

Mircea Ilie, Irinel Popovici, and Traian Dumitrache all drowned, but a fourth man survived and was fished out of the water five hours later.

Sussex Police said an investigation was under way into the incident.

'Large Black Shadow' Loomed Out of the Darkness

The survivor, Elvis Cojocariu, 45, told the MAIB that the Vertrouwen suddenly appeared as a "large black shadow with two bright floodlights" and they "suddenly realised the danger."

© Photo : Sussex Police
Traian Dumitrache, who was living in London, was a keen angler

Mr. Ilie started the boat's engine but it was too late.

The accident happened less than two miles from Shoreham harbor, near Brighton, as the Romanians were fishing for mackerel, a traditional dish in their home country.

The Vertrouwen, which was owned by a Scottish company — Macduff Shellfish — had just left Shoreham and was on its way to Grimsby, a famous fishing port on England's North Sea coast.

#MAIB report into the #collision between fv Vertrouwen and angling #boat James 2 off #Shoreham on 06/08/17 is published. 3 #SeaAnglers died. https://t.co/IboBFGbHWM pic.twitter.com/F8WiA2TOhG

​Lifejackets Would Have Saved Lives

The report said none of the Romanian anglers were wearing lifejackets and Mr. Cojocariu survived after finding a buoy to cling to before he was rescued.

It also said the smaller boat was not showing the correct navigation lights and lacked a fog horn or distress flares.

But it reserved its strongest criticism for the lookout on the Vertrouwen, who was not named. It said he was in the ship's wheelhouse but was busy looking at his laptop and at social media on his cellphone at the time of the crash, which was just after midnight.

Mr. Ilie, 43, his brother-in-law Mr. Popovici, 41, and their friend Mr Dumitrache, 51, were all Romanian nationals living in either Brighton or London.

Macduff Shellfish, which is owned by a Canadian company, Clearwater Seafoods, said it had fully co-operated with the investigation and welcomed the release of the MAIB report.

"The results of the MAIB report indicate that the skipper of the Vertrouwen followed all applicable regulations on the operation of the vessel on the night of the incident. The MAIB report does make a number of recommendations for both the commercial industry and recreational boat users to improve overall safety," Christine Penney, Clearwater's vice president sustainability and public affairs told Sputnik.

"The MAIB report recommends the commercial industry moves towards having a second person on watch while steaming. We have adopted this recommendation within our business, which goes beyond current regulatory requirements, and now require all skippers to adhere to it to ensure best operational practice. Safety at sea is an utmost priority for Macduff. We encourage the entire industry to review this report and adopt its recommendations," Ms. Penney told Sputnik.

Research in Canada in 2015 estimated six out of 10 moderate to severe car crashes involving teenage drivers were the result of driver distraction, with phones and social media often to blame.

Two Dead, One Missing After Barge Rams Into Fishing Boat Off South Korea