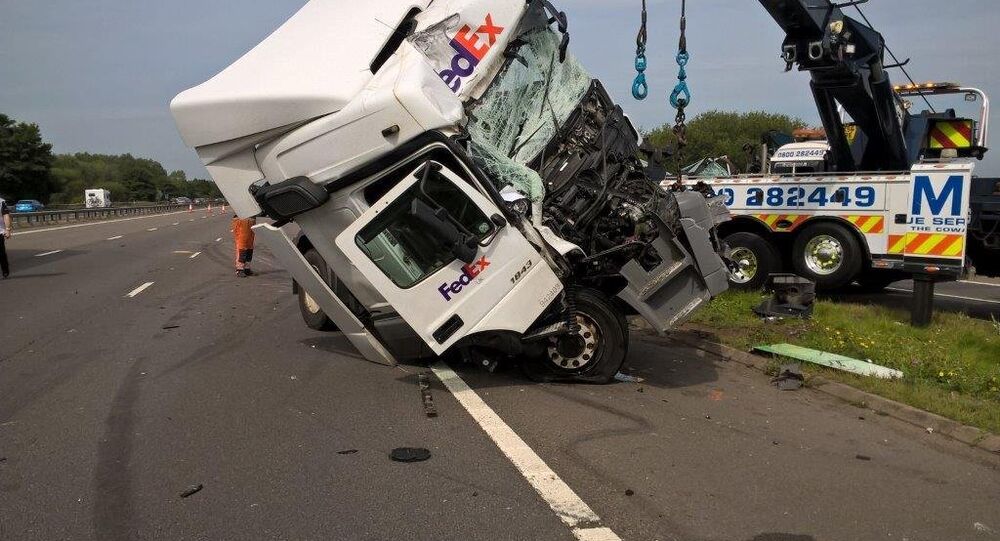 Guilty: Truckers Who Killed Eight When They Sandwiched a Minibus Face Jail

A jury has found a Polish trucker guilty of causing the death of eight people who were killed when their minibus was crushed between two lorries on England's M1 motorway. The trial heard how his truck had been driven "erratically" for two hours without being stopped or reported.

Polish trucker Ryszard Masierak, who was twice the legal alcohol limit, was largely to blame for the crash as he had fallen asleep at the wheel of his truck, which was blocking the inside lane of the M1 near Newport Pagnell, 50 miles north of London.

In court he admitted he had been drinking before the crash but denied it was the cause of the collision.

Masierak, whose driving license had been revoked prior to the crash, said he had been "sweating, felt weakness and had a headache" and passed out but denied he had been drunk.

On Tuesday, March 6, Masierak was found guilty of eight counts of causing death by dangerous driving by a jury at Reading Crown Court.

"This tragedy has permanently devastated the lives of all of those involved and is solely the responsibility of both the defendants in the case, Mr. Wagstaff and Mr. Masierak," said Detective Sergeant Gavin Collier, of Thames Valley Police.

"What is so poignant is that this tragedy was completely and utterly avoidable," he added.

Victims Had Been En Route to Disneyland

On August 24 last year a minibus driver had been ferrying 11 passengers from Nottingham to London, where they were due to get on a coach to take them on to Disneyland Paris.

At 3am the driver, Cyriac Joseph, 52, noticed Masierak's truck stopped in the inside lane — where it had been stationary for 12 minutes —and put on his hazard lights as he waited for a gap in the traffic so he could overtake.

Wagstaff, who was driving a Fed Ex truck and chatting to a friend on a hands-free phone, failed to notice the minibus and ploughed into the back of it without even braking.

The minibus was shunted under Masierak's truck and Mr. Joseph and seven of his passengers were killed. They were mainly Indian nationals working for Wipro, an IT firm in Nottingham, who had been looking forward to the trip to Disneyland.

One of the survivors was a four-year-old girl, Shravathi Karthikeyan, who was orphaned by the accident.

Oliver Saxby QC, prosecuting, said Masierak, who worked for AIM Logistics, picked up the truck from Worcester and was spotted driving it the wrong way around a roundabout near Birmingham at 1.30am.

He was also spotted driving as slow as 11 miles an hour on the M1 and he stopped on the carriageway for eight minutes before resuming his journey south.

Under cross examination by Mr. Saxby, Masierak was asked why he had not pulled over onto the hard shoulder or driven up the slip road yards from where the crash occurred.

"I knew something bad was happening to me," he replied.

The jury is now hearing from the other defendant in the case David Wagstaff. The 54-year-old Fed Ex lorry driver has taken to the witness box. Mr Wagstaff was on a hands free call at the time of the crash. He’d been talking to his friend for nearly an hour.

Asked by his barrister what they were talking about Mr Wagstaff said Donald Trump. Visibly upset he told the jury he couldn’t remember anything from the moments before the crash or the crash itself.

"This slip road was in the distance as if some mist was in my eyes. Instead of seeing one lane I could see two," said Masierak, who spoke through a Polish interpreter.

Mr. Saxby said two empty cans of cider were found in the cab of Masierak's truck and after the accident he appeared to be in a daze and asked a police officer who had been driving his truck.

But his attempt to feign innocence was ruined because he was wearing an AIM Logistics polo shirt.

© Photo : Thames Valley Police
David Wagstaff, whose momentary lapse in concentration led to the deaths of eight people on the M1 motorway

Wagstaff, 54, from Stoke, admitted to his role in the crash at the time.

"The collision is my fault. I hit the back of all of them. It was my fault. They appeared to be stationary and I ploughed into the back of them without touching my brakes at all," Wagstaff added.

Wagstaff, who has been diagnosed with post-traumatic stress disorder, told the court he could not remember anything about the crash but his doctor reported that he had "vivid and intrusive memories" about "the recovery of bodies."

Accident investigator, Robert Wagstaff, who is not related to the defendant, said he had been on "autopilot" and was suffering from "inattentional blindness," meaning that he did not notice the minibus even though it was in plain sight.

Masierak had denied a total of 20 counts, including causing deaths by dangerous driving and causing death by careless driving when over the alcohol limit.

The pair will be sentenced at Aylesbury Crown Court on March 23.

The M1, which runs between London and Yorkshire, is one of Britain's oldest motorways, having opened in 1959.