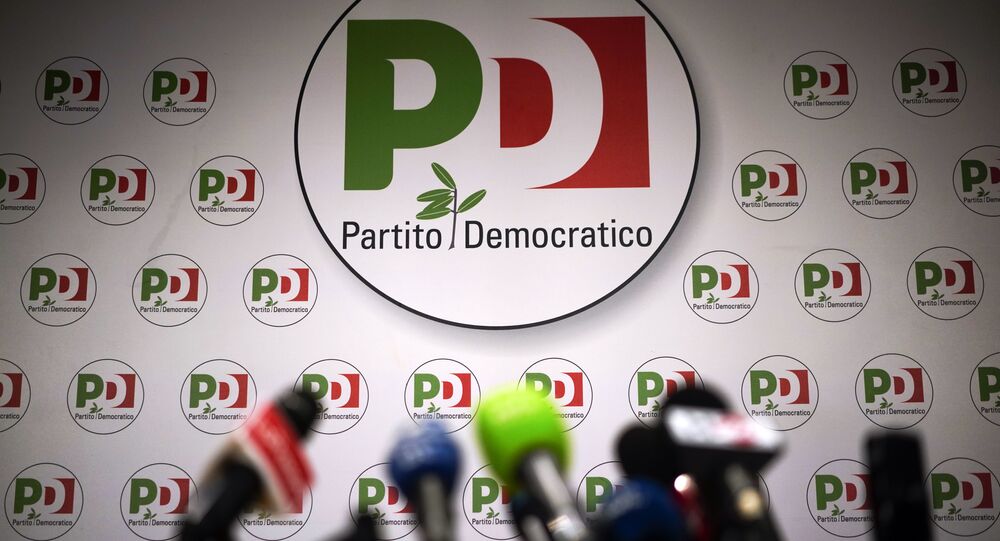 ROME (Sputnik) - The Democratic Party (PD) of Italy has to ally with the anti-establishment Five Star Movement (M5S) in the current situation of a political deadlock in order to allow the formation of the government and to prevent right-wing Lega from entering into power, Carlo Dell'Aringa, a member of the Chamber of Deputies told Sputnik.

"I think the only possible coalition is the one of the PD with the M5S. Even if there are different positions, still I think they might find a common ground about what to do with the next budget and with the new electoral role," Dell'Aringa, who served as a vice-secretary of state at the Labor Ministry, said.

Sunday's general elections in Italy put country in a deadlock. None of the political forces gained a majority strong enough to be able to form a government. The center-right coalition of parties got a narrow edge over its main contender — the anti-establishment M5S, but the latter still turned out to be the most popular single party.

The intrigue of the outcome is that the ruling PD, which lost its position, still holds the key and turns out to be a winner even after the defeat, as without its support no one will be able to form the government.

The center-right coalition, consisting of anti-immigrant eurosceptic Lega, run by Matteo Salvini, center-right Forza Italia, run by Former Premier Silvio Berlusconi, and Brothers of Italy, got around 37 percent of votes, while the M5S received around 32 percent. The PD got 19 percent.

Interestingly, Salvini's Lega outperformed Forza Italia within the center-right coalition, prompting party members to call this result a historic victory and unleashing speculations of Salvini as the country's next premier.

"M5S is less dangerous for the country and is not so far from the PD in terms of the content of the political and economic program. The PD cannot share the position of the Lega on immigration. There is no way of sharing such ideological position," Dell'Aringa said.

© REUTERS / Yara Nardi
Italian Comedy Depicts Returned Mussolini As Elections Near
However, PD leader Matteo Renzi made a statement on Monday, saying he would stay at his post until the presidents of the Chamber of Deputies and the Senate are elected, and he could not be more eloquent in saying the PD party will make no alliances with "extremists" and "populists," which basically refereed to both Lega and M5S.

"The PD should be ready to start talking to the M5S. From this point of view, I don't think that Matteo Renzi is doing the right thing… It puts country in a deadlock. In the end, we must look at what the political and economic sentiment of the party is. It's not so far from what the PD believes compared to the views of the Lega. Also on migration. What the M5S has said about migration is not so hard compared to Lega," Dell'Aringa said.

M5S, in turn, was very clear prior to the election in ruling out any alliances or coalitions.

Therefore, the prospects of exiting the current political impasse for Italy are now clouded as never.

The new government of Italy, once formed, should first of all change the electoral rules in order to prevent such post-election political deadlocks as the current one Carlo dell'Aringa said.

"At least there should be a government in charge doing fundamental things. First of all, new electoral rules, a new legislation for elections based more on the majority principle than the latest one, because otherwise if we go straight away for the new election, it might happen that the situation will not change, so it might be dangerous for economy and social cohesion. This is the first thing that should be reformed," dell'Aringa, who served as a vice-secretary of state at the Labor Ministry, said.

In the situation of a hung parliament, the president of the republic should call on all political forces to form alliances and create a government. In case this does not happen, Italy will be facing new elections after summer.

The center-right coalition, consisting of anti-immigrant Eurosceptic Lega, run by Matteo Salvini, center-right Forza Italia, run by former premier Silvio Berlusconi, and Brothers of Italy, got around 37 percent of votes, while the M5S received around 32 percent. The ruling Democratic Party (PD) got 19 percent.

The rise of Eurosceptics puts in question Italy's future relations with the European Union and its financial institutions.

"Second, we need to reassure the financial markets by being ready to prepare the budget for the next year. And that should happen just before summer," dell'Aringa explained.