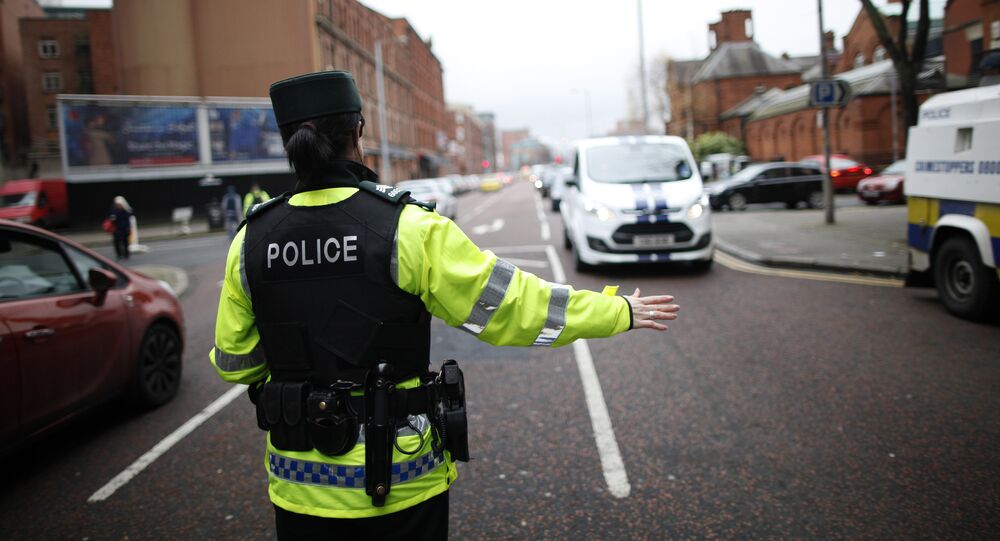 MOSCOW (Sputnik) - A partial explosion of an improvised explosive device (IED) on the A2 road between Belfast and Bangor in Northern Ireland has ignited a car belonging to a police officer, the Sky News broadcaster reported Tuesday.

According to the Police Service of Northern Ireland, the female driver of the vehicle escaped uninjured, as she was not in the car at the moment of explosion.

Police said that it received a report that a car caught fire at the junction of Ballyrobert Road early in the morning and that a bomb squad was at the scene.

Army technical officers still trying to establish the cause of the suspicious blaze in the car near Ballyrobert which happened around 8.30 this morning pic.twitter.com/9284Iz5Gkt

© AP Photo / Jens Meyer
Car Rams Into German SPD Party Headquarters in Berlin - Police
According to the Guardian newspaper, citing security sources, the bomb could have been placed under the officer's car by one of the members of violent republican groups putting up a fight against the peace process in the region.

The road where the accident took place remains closed while the investigation into the incident is underway, Police Service of the Northern Ireland says in its Twitter, asking motorists to avoid the scene.

Police are currently working to establish the circumstances of how a car caught fire on A2 between Belfast and Bangor this morning.

The main A2 remains closed at this time while the investigation into the circumstances of the incident continue.

Motorists are advised to avoid the main A2 between Belfast and Bangor following reports of a car on fire at the junction of Ballyrobert Road.

Diversions are in place and motorists should seek an alternative route for their journey.