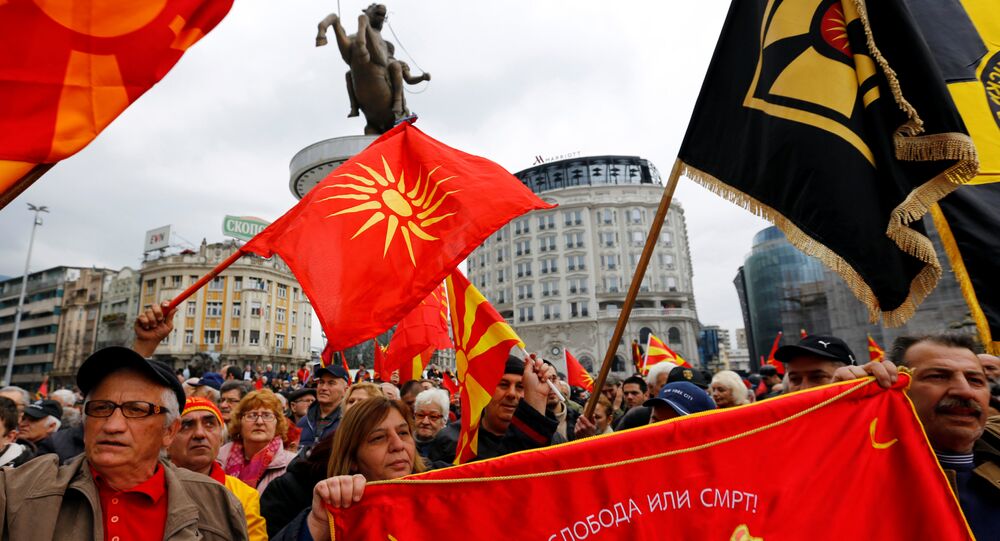 Hundreds of thousands of Macedonians in Macedonia’s capital Skopje and in various cities worldwide took to the streets to defend their name and identity, effectively rejecting demands by NATO and the European Union for membership in those organizations, World Macedonian Congress President Todor Petrov told Sputnik.

In order for Macedonia to be admitted to NATO and the European Union, member state Greece has demanded that Macedonia change its name and identity, and codify the change in the country’s constitution. Greece has claimed the province of Macedonia in its territory is solely Greek.

Protest in #Skopje against the negotiations (between #Macedonia and #Greece) to change Macedonia's name so that Greece removes their veto preventing Macedonia from joining #NATO and #EU. pic.twitter.com/d57kLuD7qc

"The protests over the past days show that Macedonians are united in the defense of our name and Macedonian identity, and do not consider membership in NATO and the EU worthwhile," Petrov said on Sunday. "Macedonians now fully resist attempts by Washington to usher Macedonia into NATO at the expense of the fundamental principle of national self-determination, and demand entry in the UN family of nations under its name and without being discriminated against, as it has been for the past three decades."

Earlier in the day, up to 50,000 Macedonians protested in Skopje demanding an end to negotiations about Macedonia’s name. More than 100,000 Macedonians rallied in various cities in Australia and thousands of others protested in Europe — including in Amsterdam, Malmo, Prague — as well as in Washington, DC one day earlier.

Extensive coverage of #Greek protests in the past, but
NO coverage by @euronews of any #Macedonia|n protests.#EU#WeAreMacedonia#reuters pic.twitter.com/yCqOsfi6Ac

© Sputnik / Dmitriy Vinogradov
Expert Explains Possible Scenarios for Macedonia Name Raw Settlement
The "Our Name Is Macedonia" campaign, originated by the Canada-based Macedonian Human Rights Movement International (MHRMI) in 2010, has led the charge and has spawned new movements to stop the negotiations about the name Macedonia and the Macedonian identity.

Moreover, Petrov said, the protests echoed the demand for the Macedonian government to reject the law on Albanian as the second official language, which is seen as leading to the federalization of Macedonia.

"The pressure from the United States is a part of its geo-strategic calculation to cut off entry to Russia and China in the Balkans, by promoting, among other measures, the project of ‘Great Albania.’ The worldwide protests clearly expressed the will of Macedonians to defend the unitary nature of our country."

#Macedonian-#Australians took to the streets in #Perth, #Melbourne, #Brisbane and #Sydney to #protest and #promote their #national interests, #humanrights and right to self-determination#Australia #Macedonia pic.twitter.com/kasUzcTGK2

"The protests deny legitimacy to any and all moves and agreements by the US-installed government to capitulate to neighbors’ demands and sell off Macedonia’s history, church, name and Macedonian identity," he said.

Nicholov noted the protests also channel Macedonians’ dissatisfaction with restricted media freedom, a general sense of insecurity born out of the release of hundreds of criminals — including sentenced Albanian terrorists — the threats and imprisonment of Macedonians who oppose the government as well as a non-transparent way of governing that has relativized institutions.